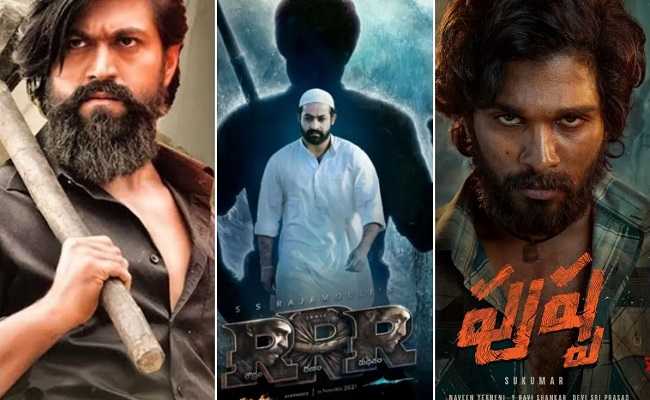 In the past month the media and cinema lovers have been talking about – Pushpa, RRR and KGF 2. What is so special about these films, after all? Well, to put it simply these three are the biggest hits of the year with ‘RRR’ and ‘KGF’ joining Bahubali 1 and 2 among the five all-time blockbusters.

In the top five only one Hindi film, ‘Dangal’, makes the cut to the Rs 1,000-crore club. The fact is, for the last 25 years Bollywood — a name coined by me to represent popular Hindi Cinema (and nothing more) — represents only 40 per cent of the total box office. Not only that, in the last decade, the overseas territory of films from the South has expanded, especially in the lucrative markets such as the Middle East and USA.

What has made industry experts sit up is the sheer force of the southern tailwinds this time around. ‘RRR’ has two young stars from the South, Ram Charan and Jr NTR, and is helmed by ‘Bahubali’ director S.S. Rajamouli, arguably the most successful pan-Indian filmmaker. ‘KGF 2’ stars Kannada superstar Yash and is directed by the young Prashanth Neel. ‘Pushpa’ has Allu Arjun and Rashmika Mandana playing the lead characters under the direction of Sukumar. The crew is largely South Indian.

Not only are these films breaking box-office records, they have also set new standards in technical excellence. Budgets in Telugu and Tamil films often exceed those of Hindi films.

Let us look back in time. Since the early 1950s films made on the other side of the Vindhyas had thrown up stars, such as Sivaji Ganesan, MGR, NTR, Rajkumar and Prem Nasir. Studios and production houses from Chennai and Hyderabad, like Gemini, Amavasya Vauhini, Prasad, Annapurna and Ramakrishna, produced dozens of Hindi blockbusters. Dilip Kumar, Dev Anand, and Raj Kapoor, all worked in their films. As did Shammi Kapoor, Dharmendra and a host of other Mumbai actors. Rajendra Kumar and Jeetendra owe their stardom to films produced by these producers.

Interestingly, while a number of Hindi film actresses from Vyjantimala, Padmini, Waheeda Rehman, Hema Malini, Jaya Prada and Sridevi were from South India, except for a rare film, most male actors kept away from Hindi cinema.

Somewhere in the 1960s, politics enticed Tamil and Telugu artistes, and soon, the line between cinema and reality got blurred and for the first time stars became chief ministers and parliamentarians. Films made in the South slowly became larger than reality with elaborate song sequences, outlandish sets and action by the time a new generation took the baton.

First, Rajesh Khanna and then Amitabh Bachchan attained superstardom, in Chennai, it was the turn of Kamal and Rajini. At the turn of the century, some sort of Balkanisation took place in cinema. Just like regional parties won at the hustings, regional stars not only in the South, but also in West Bengal, Punjab, Bihar and Maharashtra captured the local box office. Unfortunately, the mainstream media got obsessed with Bollywood not realising that regional cinema had grown bigger.

As the multiplexes emerged, Hindi cinema turned glossy and chic. Fanned by extended media coverage, social acceptance of potboilers grew. Corporations and easy lending by banks, and access to capital, both foreign and domestic, brought about a seismic shift.

In Bollywood, actors such as the three Khans, Ajay Devgn, Akshay Kumar and Madhuri Dikshit, Sridevi, Raveena and Kareena, et al, were now a part of the first weekend phenomenon. FICCI and CII, red carpets at Cannes and Berlin. Entertainment was big news. As newspapers and TV channels featured more and more Bollywood, the next generation took charge.

The South, meanwhile, was seeing a makeover. Its films became edgier as actors like Venkatesh, Pawan Kalyan, Mohan Babu and Suriya, and a new breed of directors expanded the market. Often, Hindi films were based on South Indian hits. Bollywood actors started doing the occasional regional film to grow their appeal nationally.

When streaming video giants such as Netflix, Amazon Prime, Disney+ Hotstar, Zee 5, Sony Liv, Hoichoi and SUN Next entered the scene about five years ago, a revolutionary new screen window opened up. And it is only going to get bigger with Bodhi Tree Systems, a platform funded by James Murdoch and Uday Shankar, joining hands with Reliance and Viacom 18 to give birth to one of the largest TV and streaming companies in India.

It is possible now to make a viable film without the traditional release. To survive in the new multi-screen scenario, producers and actors got more adventurous.

The gamut of stories became wider. More professionalism crept in. Even before the new scene stabilised, Covid-19 hit the world. Lockdowns and restrictions stopped production and shut down cinemas. The world of showbiz, like other industries. turned topsy-turvy.

Locked in their homes, people started tuning into TV and streaming video. Millions who did not have smart TV watched on their smartphones. When cinemas opened finally after a hiatus of two years, there was a debate over whether audiences had drifted away from the large screens. A few films that were released after the lifting of restrictions disproved this by getting the cash registers working overtime at the box office. But there was another elephant in the room. Of the 2,000 films produced in the country annually, Bollywood made only 300 or so. Suddenly, there was a shortage of programming for cinemas.

The South, it so happened, had more films that were ready, including big-budget extravaganzas. Some relied on edgy stories, others on world-class SFX. The audience too was ready to experiment. In the last three months the box-office algebra went off into a new tangent, as the successes of ‘Pushpa’, ‘RRR’ and ‘KGF: Chapter 2’ has shown.

I think this change is for the industry’s good. Hindi films will have to compete not only with Hollywood, but also with Tollywood, Mollywood, call them whatever. One wishes the market for Hindi cinema will also grow exponentially as will that of movies in other languages.

The film industry is expected to reach from US$3 billion annually to US$5 billion in 2025. May the better films win.

(Amit Khanna is a filmmaker, writer and media guru)