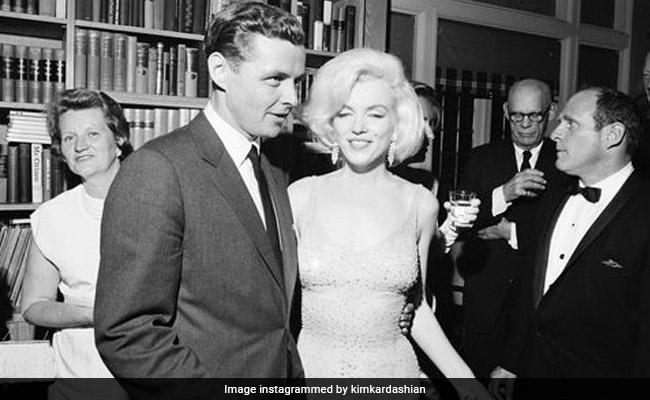 With the theme of Met Gala 2022 being “In America: An Anthology of Fashion”, it is no surprise that one of the most talked-about outfits from the event has a Marilyn Monroe connection. After all, the legendary actress is one of the most recognisable faces of American pop culture history and her glamorous outfits continue to inspire legions of couturiers and fashion connoisseurs across the world. So on Monday, when Kim Kardashian stepped onto the Met Gala red carpet in the same dress worn by Marilyn Monroe six decades earlier, the world stopped to stare.

The dress in question is no ordinary one for it is entrenched in public memory and American history like very few others are. It is the outfit that Marilyn Monroe was wearing when she chose to famously sing “Happy Birthday” to President John F. Kennedy in 1962.

According to a statement by Julien’s Auctions, here’s how the story goes: On Saturday, May 19, 1962, at a Democratic fundraiser at Madison Square Garden, President John F. Kennedy was also having an early 45th birthday celebration in the presence of over 15,000 guests. Among those present at the event that was soon to make history, was the legendary Marilyn Monroe.

Marilyn Monroe had arrived at the fundraiser in a dress that remained largely hidden behind a white ermine fur court. But as she stepped onto the stage, she dropped the coat with the flair and style unique to her and showed off her custom Jean Louis creation. The sheer, body-hugging, flesh-coloured backless dress was inspired by a Bob Mackie sketch. In addition to Marilyn Monroe’s legendary beauty, thousands of hand-stitched crystals on the ensemble made sure that all eyes were on the Hollywood star. According to People, the dress was so tight that Marilyn Monroe had to be sewn into it before her appearance.

And once she had the attention of all those present, Marilyn Monroe began to sing “Happy Birthday Mr President” in her trademark sultry voice. She had also written the lyrics to the song herself. The song and the performance went down as an iconic moment in American history and was widely reported in the press, making the dress an indelible part of the country’s costume history.

The dress is also of particular significance as Marilyn Monroe died just three months later, making this one of her last public appearances.

The outfit was sold in 2016 at an auction hosted by Julien’s for $4.81 million and currently belongs to Ripley’s Believe It or Not. The custom dress cost Marilyn Monroe around $1,440 in 1962.

Kim Kardashian, in a special Instagram post, stated that it was indeed an honour to be able to wear the dress once favoured by the legend. Sharing a picture of herself in the dress, she wrote, “I am so honoured to be wearing the iconic dress that Marilyn Monroe wore in 1962 to sing “Happy Birthday” to President John F. Kennedy. It is a stunning skin-tight gown adorned with more than 6,000 hand-sewn crystals by costumier Jean Louis.”

The Kardashians star continued, “Thank you Ripley’s Believe It or Not! for giving me the opportunity to debut this evocative piece of fashion history for the first time since the late Marilyn Monroe wore it. I am forever grateful for this moment.”

Ahead of the fittings, the reality star also had to slim down to fit into the dress, which could not be altered in any which way. And the workouts and diet helped. Speaking to Vogue, Kim Kardashian said that when she first tried on a replica of the dress, it fit her “perfectly”. When the original dress was sent on a private plane to her home in Calabasas, California, she wore gloves to try it on.