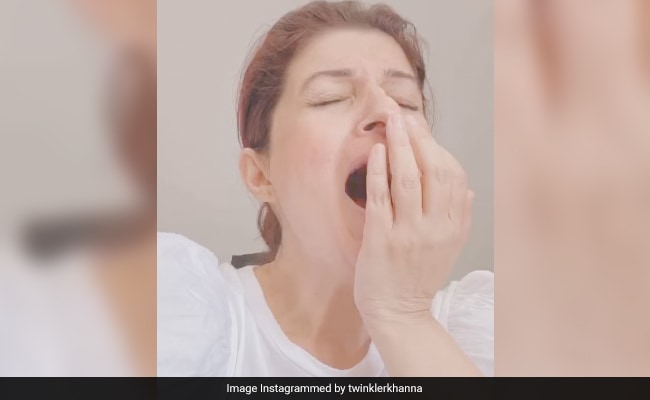 Twinkle Khanna in a still from the video. (courtesy: twinklerkhanna)

Glimpses from Karan Johar’s 50th birthday party have left all of us starstruck. All eyes were parked at the Yash Raj Studios – the venue for the party. And, how could anyone miss such a grand affair?. But here is another side to the story and it is brought to us by none other than Twinkle Khanna. Her humour and wit have already enamoured several fans. And, very few people in the B-town can match her way with words. The writer and former actress has posted a note of her condition after the party. And it is as hilarious as it can get. The video starts by giving us a glimpse of Twinkle Khanna’s outfit from the party night. Her “Last night” look featured a white top and jacket with a shimmery skirt. Then followed her thoughts from the morning after the party.

Captioning it “This morning at the office,” Twinkle Khanna is seen snoozing. Then follows a blurry screen where we can barely see her. The text on the frame read, “It’s a blur.” She added, “I hope I was well behaved. Maybe? Maybe not?” But the writer found a smart way to dodge such confusion. Twinkle Khanna cut short her line of thought saying, “Anyway, everyone will be too drunk to remember.” The next frame shows her yawning. This is not the end. What follows next is a hilarious list of things that Twinkle Khanna wants to ban. And, it includes Karan Johar too. She wrote, “Ban free drinks, ban parties, ban shiny skirt, ban Karan.”

As if the video wasn’t enough to amuse us, Twinkle Khanna also added a few witty lines in the caption. She wrote, “Hangover. Tere free drinks ka (because of your free drinks). I only go to parties once every leap year and wonder how people do this every week. Doff my hat to you folks. Let’s see how many people prefer banana chips to Bacardi and their bed to the dance floor. Let me know which side you are on by dropping a red heart emoji for party pooper and thumbs up emoji for the party animal.”

Tahira Kashyap, who was also spotted at the party with her husband, actor Ayushmann Khurrana, replied with a “hahahaha”. Actress Neelam followed suit.  Rakul Preet Singh, who made a jaw-dropping appearance with her boyfriend Jackky Bhagnani, left a series of laughing with teary eyes emojis.

Director-producer Karan Johar threw a birthday bash like no other. From Aishwarya Rai Bachchan and Abhishek Bachchan to Gauri Khan and Shah Rukh Khan, the who’s who of Bollywood was in attendance.