Soha Ali Khan has been wonderfully candid about her parenting journey with her daughter Inaaya. With husband Kunal Kemmu, Soha often shares tidbits about her learnings and her journey as a parent. Soha has an instinctive approach towards parenting and engages in multiple activities with her daughter. And reading surely takes priority in the ways the parent duo bond with their four-and-a-half-year-old. “Reading is definitely encouraged at our home. It is done by leaving a lot of books around her, within her reach. She can read, turn the pictures, invent her own stories. And now that there are simple books as well for beginners, she is starting to blend the words and read the words by herself,” shared Soha.

The couple has recently launched their new co-authored book ‘Inni and Bobo’ which is “a simple yet heartfelt story about a young girl and her adventure with a young adopted puppy,” said Soha. At the opening of Crossword Bookstores 2.0 at Kemp Corner recently, the couple launched their book to a packed audience. 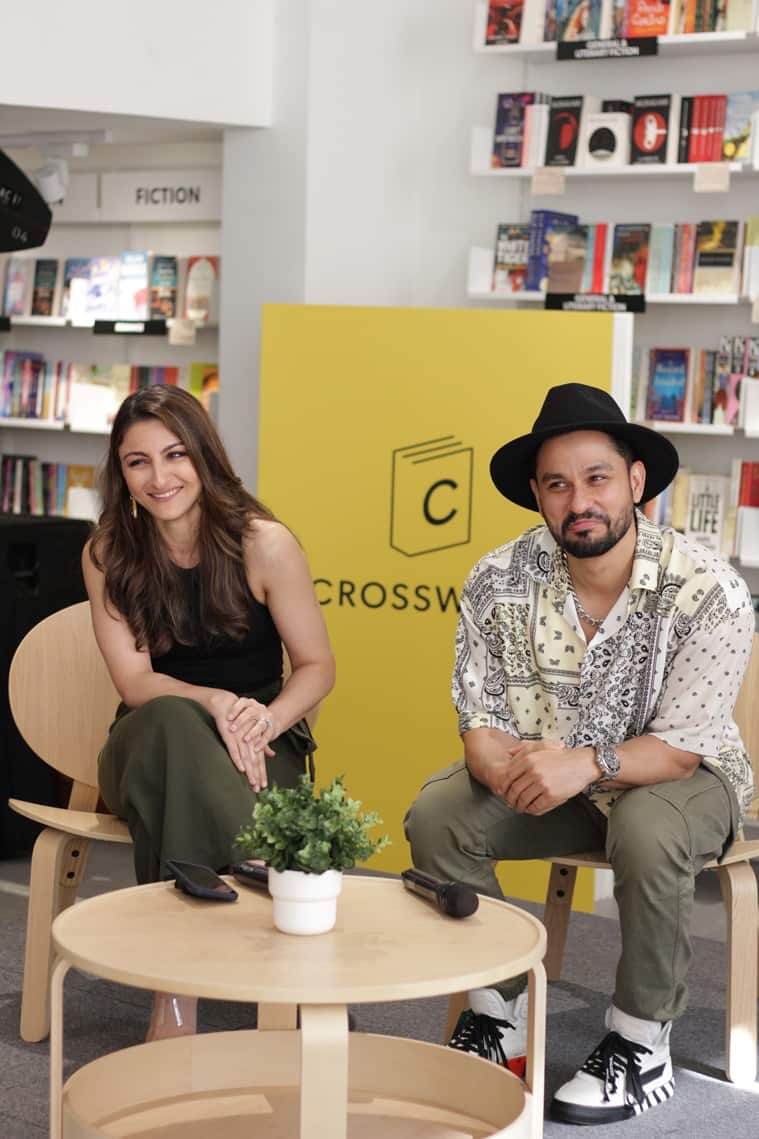 In an exclusive interaction with Express Parenting, Soha Ali Khan speaks about the new book, the importance of developing a reading habit in children, striking a balance between technology and reading habits, and more.

Congratulations on the publication of your new book! What is the inspiration behind the Inni & Bobo series?

The inspiration was really because our daughter, who is four-and-a-half years old, has enjoyed us reading to her from the time she was born. It is a habit that we have definitely encouraged. She is now starting to read a little bit herself and blend words but she still will pull down a lot of books and ask one of us to read to her, especially at bedtime. I used to read books to her and Kunal used to invent stories and ask her to actually contribute towards developing it, telling her to imagine the principal characters. Often, Inaya would want herself to be central to the story. And that’s how he told her the story of Inni and Bobbo. We thought it would be nice to have a visual reference when we are telling her the story because she wanted to know, “How does Bobo look?”, “Can I see pictures of the adoption centre?” etc. We thought instead of printing a book just for her, we could write and share it with the rest of the world.

How would you describe the narrative of your book? Would it help young readers?

It is a simple yet heartfelt story about a young girl and her adventure with an adopted puppy. It essentially deals with empathy and love of animals and people, inclusion, kindness and diversity. It would essentially be a book that parents and grandparents read to their children, or you could read it at school. It is a book that is read aloud to an age group of two to six years. Children can also read this for themselves.

The book deals with concerns such as animal welfare and adoption. Are you hoping to achieve anything in terms of larger social changes?

There was no deliberate agenda to write a book about adoption. Our daughter is very passionate about animals and often prefers stories where the animal wins in the end. I laughingly said to her that ‘Red Riding Hood is actually a tragedy because the wolf goes hungry at the end’ and she was so upset by that. We have often told her stories where animals are the centre of the story and this was just a natural result of that. Our first book also is about animals. It is so dear to us as a couple as well as to our daughter as a family. In our family, and extended family we have been surrounded by animals. The idea of adoption has been close to our hearts. Both Kunal and I are on the board of directors of an NGO that rescues and homes kittens, puppies, cats and dogs in Mumbai, along with other NGOs that look after animals.

In terms of what we are hoping to achieve — the book was written to be engaging. We used to watch Inaaya and how she was engaged with the emotion and story of the book. It can hold children’s attention for 10 minutes, which is quite a challenge for young parents, as they learn things like empathy, inclusion and love towards animals who don’t have homes of their own.

What other learning activities do you enjoy with your daughter?

I read her three stories before bedtime. That’s a sort of ritual and then many other learning ac tivities that we do together like painting, writing…I encourage her to write letters to her grandparents, we post them as well to Delhi. My mother, too, writes back to Inaaya. It could be during Christmas time, when somebody is unwell or sending handmade birthday cards. She is also learning other languages such as Hindi and Spanish. She has been doing gymnastics for a while, and is quite interested in learning ballet. We have a lot going for her even outside of school. If it is possible to open up these opportunities for your child without taxing them and stretching yourself, then why not?

What activities associated with reading and learning do you indulge in with your daughter?

Even when we go to drive, she likes to read signs, hoardings, and the names of shops. She tries to read a pamphlet. You have to build their confidence and motivate them all the time.  There is something like the Bob collection of books that is great for beginners. I, of course, read to her all the time, but I keep these in her range so that she can read it any time herself. Reading any kind of book expands vocabulary and imagination. We enjoy a non-babyish conversation. We have long and meaningful conversations where I encourage her to think about things. Sometimes people ask me how to engage a child during a flight. We have screen and meal time but it is important to chat with them, have a meaningful conversation, listen to them and give them the opportunity to answer a few questions.

In terms of parenting, what benefits do you think could be derived from introducing a young child to reading?

There are many benefits — they can engage themselves. As a young child, I was immersed in books. Love for literature and reading helps you express yourself, learn about morals and other lessons. For example, if you want your child to learn about brushing, there is a fun character that may help them to learn about them, learn healthy eating habits, and many more that literature and books help to achieve.

What are your thoughts on audiobooks as a format?

I enjoy audiobooks because my child doesn’t read completely by herself. And for long literature like Harry Potter, it can be sometimes exhausting to read for an hour and sometimes you don’t have the time, or have been unwell. That’s where you turn to audiobooks. She can pause it any time and ask about something and it’s wonderful. There are many books I have downloaded on my phone and devices that I play for her.

Having said that, I wouldn’t want audiobooks to replace books. Because I do think that there is a lot to be said about discipline when it comes to books, turning the pages, having the fingers touch words, especially when you are learning how to read.

How do you strike a balance between introducing your daughter to the latest technology while encouraging reading habits?

Children are fascinated by technology and certainly by the TV screen. And audio-visual media is certainly powerful and entertaining, we are a victim of it in many ways. If you can draw healthy boundaries as a parent, it is important as we are all guilty of binge-watching. And parents are role models for children; if you are on screen, children tend to be on it, whereas if you are reading a physical book, or listening to a podcast, then they want to do that too. At times, when my daughter doesn’t want to do something, I tell her that my trainer is coming and I don’t want to do my workout but have to. So, if sometimes she doesn’t want to go to boot camp she still goes because she sees me doing the same, maintaining self-discipline.

And of course, balance is important, I don’t deny her screen time. It can relax you, engage you, and entertain you. There is so much wonderful content out there. So, let her have some screen time that has been regulated by you.

Also, one of the things we follow is no screen time during meals as well as close to bedtime.

What can we expect from the remainder of the Inni & Bobo series?

We have written the second, besides the skeleton to the third. We really feel the potential is unlimited in terms of adventure that these two principle characters Inni and Bobbo can go on because there is so much. Even the most mundane thing can become incredibly interesting. The idea is just to write as many as we can and share them with people who are interested and invested in the beautiful relationship, this little girl and puppy share.

For all the latest Parenting News, download Indian Express App.