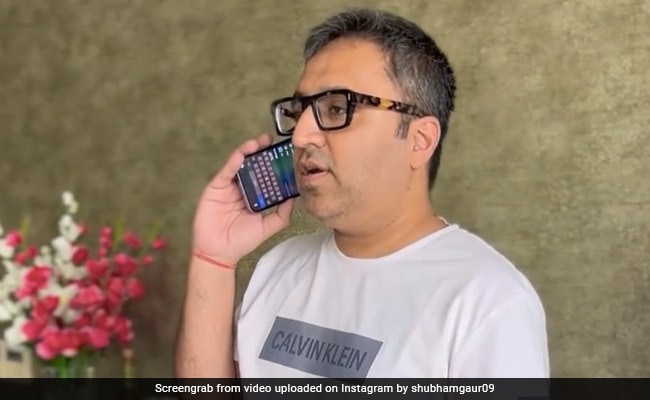 Social media users were in splits on watching the video

The billionaires and uber-rich folks of the world live very different lives than the larger middle-class population and this is not surprising. Recently, content creator and comedian Shubham Gaur succinctly pointed this out in a video. The premise of the video revolves around how differently rich people and middle-class people give directions.

While Mr Gaur embodies the average middle-class Indian, he got Shark Tank India judge and co-founder of BharatPe, Ashneer Grover, to give us an insight into how the rich give directions in the funny clip.

In the video, Mr Grover is seen speaking over the phone, giving directions to Mr Gaur on how to reach his house. Mr Gaur is seen telling him in Hindi, “I have almost reached. Tell me where to come.”

To this, Mr Grover replies, “Bring your car in the service lane. My guard will be outside. He will park your car.”

Mr Gaur then asks with a tone of amazement, “The man wearing the Gucci T-shirt is your guard?”

A non-chalant Mr Grover replies, “That person is the sweeper. The guard is someone else entirely. My Maybach will be visible after you enter. It’s a long car, cross it and come. You will find a Porsche parked behind it. A personal lift, or private lift, is located to the right of the Porsche. It opens at my front door. Just ring the doorbell.”

The video then cuts to a middle-class Mr Gaur, who is also over the phone. Speaking to a friend, Mr Gaur says, “Yes you have to take a left from the roundabout. Yes, foreigner, the road on which the dog has defecated.”

He further adds, “Yes, you must drive down the battered road. Come in, there’s plenty of parking space. I’ll make sure you get a spot to park.”

At this point, comic Saloni Gaur makes an appearance, and asks, “You’ve asked someone to bring the car into the lane again? Our neighbours will create an issue now.”

To this, Shubham Gaur replies, “He’s coming on a cycle.”

In the caption, he wrote, “Apne ghar ke pas ka landmark batao guys (Tell me about the landmark near your homes, guys).”

Needless to say, the engaging video had Internet users in splits. Fans were thoroughly impressed by Mr Grover’s cameo and cheered for him in the comments section.

Replying to the post, one user said, “Bhai unexpected collaboration,” and added a heart emoji.

A happy fan wrote, “The OG himself,” with heart-eye emojis.

“Waiting for a sequel,” commented another user.

“We want to see you as a creator now Ashneer,” one comment read.

Tell us what you think of the video and Ashneer Grover’s acting skills in the comments.