Samantha turned 35 on April 28. She took to Instagram to share a smiling picture of herself from Kashmir. 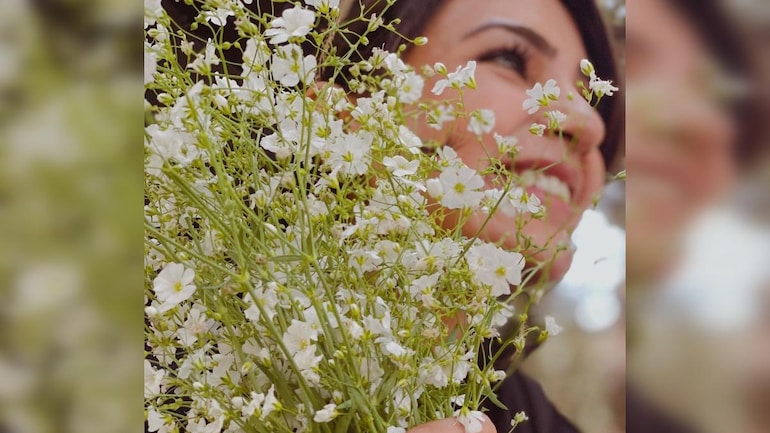 Samantha treated fans to a beautiful picture of herself.

Samantha is currently in Kashmir shooting for her upcoming film with Vijay Deverakonda. Taking to Instagram, the Shaakuntalam actress took to Instagram to treat fans to a gorgeous picture of herself holding a bunch of flowers. She wrote that she’s ‘older and wiser’ in the new picture. The actress celebrated her 35th birthday on April 28 on the sets of her upcoming film.

SAMANTHA IS OLDER AND WISER

Samantha turned 35 years old on April 28. Vijay Deverakonda, Shiva Nirvana and the entire team played a prank on Samantha and surprised her on her birthday. The actress is now basking in the success of her recently released film, Kaathuvaakula Rendu Kaadhal.

On May 2, Samantha took to Instagram to share a stunning picture of herself. She can be seen holding a bunch of flowers in her hand. She captioned the photo, “Older and wiser (sic).”

Samantha is fresh from the success of her recently released film, Kaathuvaakula Rendu Kaadhal. The film, directed by Vignesh Shivan, hit the theatres on April 28, and is running successfully in theatres. The actress is waiting for the release of her upcoming film, Shaakuntalam. Directed by Gunasekhar, the film will hit the theatres later this year.

Apart from Shaakuntalam, Samantha has Yashoda, a Tamil-Telugu bilingual film, helmed by director duo Hari-Harish. She also has a horror film with Shatharuban and her first foreign film, Arrangements of Love in the pipeline.