Salman Khan waved at his fans from his balcony on Eid today, May 3. The superstar shared pictures from the day on social media and wished everyone Eid Mubarak. 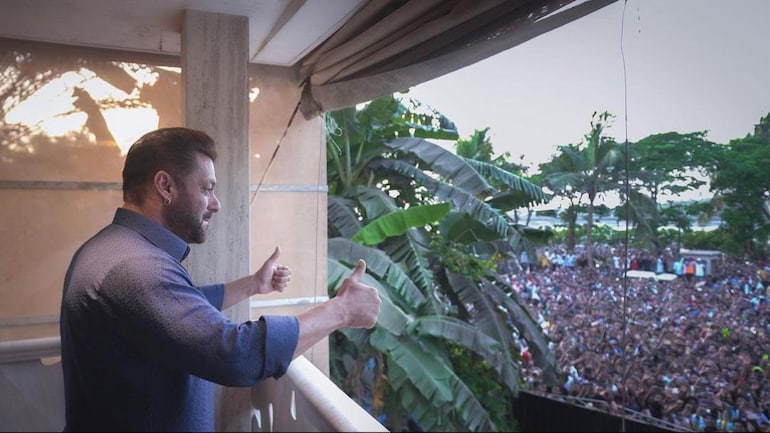 Salman Khan made an appearance on the balcony of his Mumbai residence, Galaxy Apartments, on Eid today, May 3. Fans had gathered in huge numbers outside the superstar’s home to catch a glimpse of him. Salman waved to them and wished everyone Eid Mubarak with pictures from the day on social media.

Shah Rukh Khan made Eid celebrations of his fans special as he made an appearance on his home Mannat’s balcony. He waved at his fans, blew kisses and also did his signature pose. Salman Khan also greeted his fans on the special occasion. He waved at them from his balcony.

Sharing pictures from the day with a sea of fans in the background, Salman Khan wrote on social media, “Wishing all Eid Mubarak (sic)!”

WHAT’S ON THE WORK FRONT?

Salman Khan will be seen next in Tiger 3. While Salman has reprised his role as RAW agent Tiger in the film, Katrina Kaif will be seen in her role as ISI agent Zoya. Directed by Maneesh Sharma, the spy thriller is bankrolled by Yash Raj Films. Salman also has Kabhi Eid Kabhi Diwali with Pooja Hegde and Aayush Sharma lined up. Besides these, he will be seen in cameo roles in Shah Rukh Khan’s Pathaan and Aamir Khan’s Laal Singh Chaddha.