Pikoo (1980), a 26-minute short Satyajit Ray made for French television, remains one of Ray’s least watched films in India. Even the centenary of the filmmaker’s birth last year did not generate much enthusiasm for the film, although decent prints of the movie are now widely available. Does Pikoo really merit this neglect? If not, what explains it? Ray’s birthday on May 2 is as good a time as any to consider this question, because it is safe to assume that while a lot of his movies will get watched again and discussed on this day, Pikoo will hardly be missed.

Adapted from Ray’s own short story Pikoor Diary (‘Pikoo’s Diary’), Pikoo plays out over one day in the life of its young protagonist, the eponymous six-year-old son of an affluent Bengali family of south Kolkata, presumably sometime in the 1970s. The family comprises his parents, Ranjan and Seema, and his very old and sick grandfather who will die of a heart attack in the course of the day. Pikoo was greatly attached to the old man, keeping him company and sharing secrets with him even as the others were busy pursuing their own lives and loves. The child does not fully comprehend the death, but senses that things will never be the same for him again. His instinct also tells him that others in the family may not necessarily be affected the same way as he is. So, although it was he who first finds the old man’s body, already stiff and cold, he keeps the discovery to himself. Pikoo has always been a lonely child but by the end of the day, he feels more alone than perhaps ever before.

Meanwhile, Seema also has mixed feeling about the day, though for very different reasons. Earlier that day, as Ranjan leaves for work, he lets Seema know that he is aware that Seema has a lover who drops in often in the afternoons when Ranjan is away at work. Hitesh, the lover, calls Seema soon after, and sure enough, a rendezvous is set for later that day. The fact that Pikoo has no school that day was briefly discussed between the lovers, but they agreed to meet anyway, in Seema’s bedroom, as always.

Hitesh arrives with a gift of a painting set for Pikoo, much to the boy’s delight. Seema then packs Pikoo off to their lovely, well-tended garden, suggesting that the child draw every flower that is on view there, using sketch pens matching the exact colour of each flower. Pikoo goes away happily, and is busy drawing and colouring as his mother and her lover retire to the bedroom. Meanwhile, unknown to everyone, the grandfather suffers a massive coronary stroke. He threshes in his sick bed, speechless, trying to call for help, but none comes and he dies. Pikoo has a problem as he comes to a plant bearing white flowers: there’s no pen with white ink. He cries out to his mother, seeking her guidance. Seema and Hitesh’s lovemaking is interrupted, leaving Hitesh bitter, angry. Pikoo, however, has figured out a solution to his problem and shouts it out to Seema: the colour black will be a proxy for white. As he paints the white flower with black ink, the first drop of rain falls from an overcast sky, smudging Pikoo’s drawing. Upset, the child heads home, where he finds his grandfather dead. Listlessly, he sits down, looking out on the rain even as his mother emerges unhappy and confused from her bedroom. Hitesh has left in a huff. 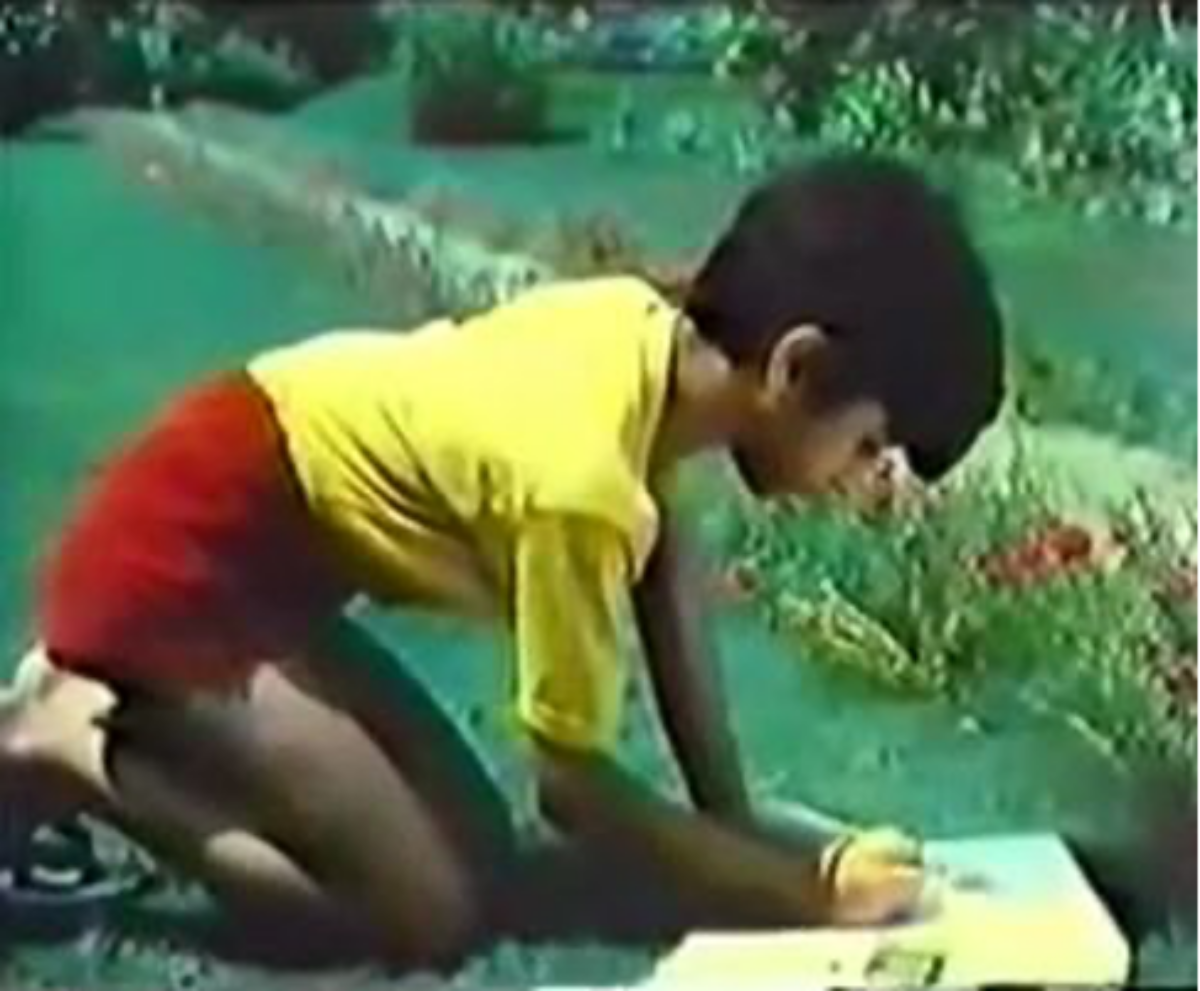 A still from ‘Pikoo’.

This little film is signature Ray in its technique and in how it moves from one frame to another. Early on, it establishes Pikoo’s loneliness with a few deft touches. The growing distance between Ranjan and Seema is quickly brought out through a short, sharp verbal exchange between the two where an impassive dhobi (who has come to pick up the washing) provides the perfect foil. Snatches of the durwan eating his frugal lunch and the cook enjoying a quick card game with his buddies offer peeks into the uncomplicated lives of these men who exist on the margins of the prosperous family’s daily routine. The fact that Pikoo confides his secret to his grandfather and implores him to not share it with his parents suggests he is no longer very close to either of them, an impression strengthened later by the way Seema handles her son.

There is some irony in how Pikoo screaming at a barking dog to quieten it down links up with a later episode where he shouts down, in the exact same manner, the two lovers bickering noisily behind closed doors. Ray even manages to pack in a delightful little exchange between Pikoo and the durwan in which ‘jhaal’ (spicy) is paired off with ‘bhaal’ (colloquial for ‘nice’).  The editing is crisp throughout, the pace is lively and the dialogue slight and spare, and every single word seems to be pushing the storyline towards the denouement. Pikoo is nearly as flawless technically as the best in Ray’s oeuvre. And, above all, little Pikoo is magnificent as a child struggling to come to terms with the world of adults.

And yet, Pikoo leaves one vaguely uneasy, disquieted. It’s not easy to put one’s finger on what troubles us here, but one senses that Ray did not put in a lot of effort to conceptualise the two lovers’ characters or personalities. Hitesh, in particular, comes across as somewhat of a one-dimensional man, unfeeling and relentless in his pursuit of pleasure. There is nothing in the film to suggest that his interest in Seema goes beyond her body. Seema’s is a more nuanced character, but she can also be manipulative,  as when she gets rid of her son’s presence by sending him off to the garden. We don’t also get a sense of what it is that draws her to Hitesh, except that we know she is getting along poorly with her husband. When confirming her date with Hitesh, she brushes aside the thought that Pikoo being at home that afternoon might complicate matters somewhat – and does so quite matter-of-factly. And overall, there is little in the film to suggest that she is particularly fond of her son.

Ray’s ambivalence about Seema is thus quite plain. But some fresh uncertainty is added when, after sending Pikoo off to the garden so as to be able to be intimate with Hitesh, Seema breaks down and weeps, much to Hitesh’s annoyance. After having arranged her afternoon tryst quite deliberately, and then making sure that Pikoo is not around to distract them, Seema’s late surge of guilt is a little uncharacteristic of her. After all, right through the film, she comes across as being in complete charge of her thoughts and emotions. Why this apparent inconsistency, then – an inconsistency that Ray was too sharp to not have sensed himself?

One believes the inconsistency comes from Ray’s inability (or unwillingness) to visualise Seema, and the situation she finds herself in, with a degree of understanding and sympathy. (As for Hitesh, there is enough to suggest that Ray couldn’t help drawing his character with a certain distaste.) Seema’s personality seems to be defined by her liaison with a lover and by little else. If such a reading appears preposterous – after all, we are talking about a master filmmaker whose wide and deep liberalism never seemed to desert him – we need to recall what Ray said about Pikoo in an interview he later gave to a film magazine:

“Pikoo is a very complex film. It is a poetic statement which cannot be reduced to concrete terms. One statement the film tries to make is that, if a woman is to be unfaithful, if she has to have an extramarital affair, she can’t afford to have soft emotions towards her children, in this case, her son. The two just don’t go together. You have to be ruthless. Maybe she (Seema) is not ruthless to the same extent. She’s being very Bengali. A European in the same circumstances would not behave in the same way.”

As extraordinary as the case this statement seeks to make  – parts of it, indeed, could have come straight out of  a modern-day religious bigot’s treasured playbook – it seems to prove one thing beyond doubt: that Ray’s ambivalence towards Seema was not accidental or wholly unintended. It was, for want of a pithier term, subliminal. This ambivalence colours his characterisation of the woman who occupies nearly as much space in the film as Pikoo. And, in turn, it colours the viewer’s perspective on Seema’s story as well. For, like it or not, Pikoo the movie – though not Pikoor Diary, the original short story – is not only about a day in a child’s life; equally, it’s the story of his mother’s day as well. And that part of the story does not carry conviction. No wonder Ray aficionados are not terribly enthusiastic about this little film, its sleekness and technical sophistication notwithstanding.

Anjan Basu writes about culture and the politics of culture. He can be reached at basuanjan52@gmail.com.