The process of mask making started out very impulsively for Mike. And very soon it became an extension of himself, and a way to communicate with the world

The process of mask making started out very impulsively for Mike. And very soon it became an extension of himself, and a way to communicate with the world

Shards of mirrors, feathers, jewels, delicate leaves and flowers. These are the objects American artist and photographer Mike Sullivan, 28, uses to tell his stories, with the help of the masks and headpieces he fashions.

To Mike, these are not just objects of beauty, but a safe space for the wearer. “People are incredibly vulnerable when we are creating an image together. Masks and crowns help them feel an inner sense of liberation and self worth,” he says. Mike visited India at the start of the year, and the three weeks he spent between Kerala, Goa and Karnataka became an impromptu creative residency.

He explored local flower markets, jewellery shops and collaborated with artists along the way, including Goa-based photographer Pretika Menon. “I created far more than I expected and am extremely grateful for how open people were,” he says.

It was his training in theatre in Ithaca College, New York, followed by a semester at Ithaca College London Center, that led him to grow deeply interested in mask making. “For a Shakespeare/Grecian section of the semester, we had to create and perform in our own masks, which was the first leg in my journey as a mask maker.” 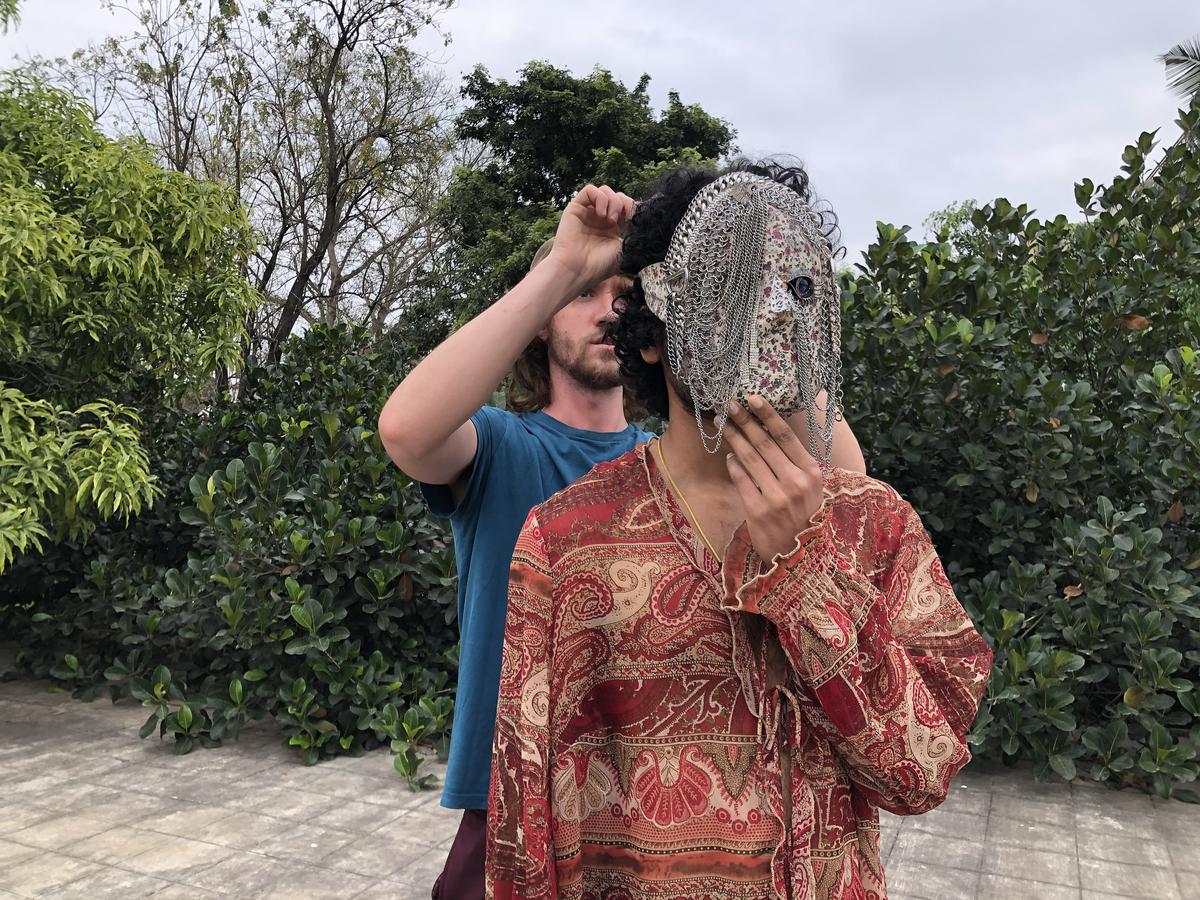 London became his playground to experiment with his queer identity and gender expression. “I was of legal age to enter queer spaces for the first time, and the first mask I made and wore out in public was in London. I was meeting people from the community, wearing heels, playing with make-up, experimenting with drag culture. Drag is a means for people to express themselves, and a crown can be another tool to help bring a person to that place of free expression.”

The process of mask making started out very impulsively for Mike. And very soon it became an extension of himself, and a way to communicate with the world around him .

Nature has always been a leitmotif in Mike’s often fragile pieces, having grown up by the riverside, with marshes and woods all around. “I grew up hiking with friends, foraging for wasp nests and making monster faces with dead flowers and crab legs.”

The stigma around queer expression led to him to incorporate nature. “Because nature is a tender, universal language that’s accessible to everybody. I had political differences with loved ones but I didn’t want to write them off. I wanted to make my queer expression palpable to them despite our different ideologies. So I started using nature and flowers as a way to destigmatise being queer.”

Life events nudged him along his artistic journey. “My practice deepened in Provincetown [Massachusetts], where you get to be seen and celebrated. People engaged with my work and I got to understand their perception of it.” The pandemic and its isolation also led Mike to deepen his practice. “Pre-pandemic, I was able to use crowns and collaborate more regularly with others. But with social distancing becoming the norm, the focus was brought back to masks. My parents helped photograph me while I wore the pieces.” Mike also found his old jewellery box during lockdown, and started wearing the pieces and using them in his masks. “The jewels add a layer of adornment and storytelling. I also use vintage clothes because it opens up different interpretations to the image,”

Mike currently works with cardboard, foil, found objects and versatile materials that make the piece less rigid; but he would eventually like to make more sculptural art pieces. “I’d love to see my work in galleries, museums and even movies. But at the core, I want it to be a means for people to express themselves intentionally and safely. It’s important for people to release themselves from inhibitions and embrace creativity.”

The writer runs The Alipore Post and started Chitthi Exchange, a penpal project, to help people connect during the pandemic.