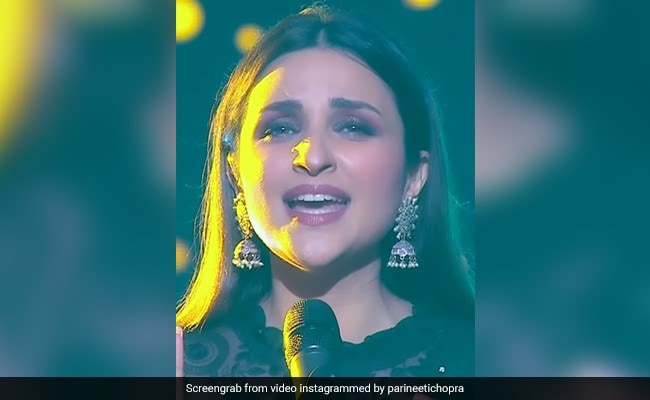 That Parineeti Chopra is a gifted singer is a well-known fact. The actress, who is a trained classical singer, has sung for herself in movies in the past but it was on a television show recently that she got the opportunity to truly win fans over with her vocal skills. The Ishaqzaade star served as a judge alongside Mithun Chakraborty and Karan Johar on the reality show Hunarbaaz: Desh Ki Shaan. As part of the show, Parineeti Chopra often joined special guests to sing a song and even performed solo on occasion. And, the love coming her way has been overwhelming, Parineeti Chopra said in a post.

Sharing a video of her singing on the show, Parineeti Chopra said, “The love I am getting is unreal. Thank you.” In the video, the actress is singing the iconic Lag Ja Gale, sung originally by Lata Mangeshkar, as Karan Johar and Mithun Chakraborty express their appreciation and cheer her on.

A few weeks ago, Parineeti Chopra shared another video of herself singing on the show alongside Neha Bhasin. In the video, the two artists are seen performing the song Kuch Khaas Hai from Fashion, which won Parineeti’s cousin Priyanka Chopra a National Award for Best Actress. In the caption, she wrote, “Aah me and singing. My meditation. So much fun doing what I love the most! And this time with you Neha Bhasin. We should do this more often.”

In another clip she shared, Parineeti Chopra is seen singing Aankhon Ki Gustakhiyan with Kumar Sanu. “Am I really singing a duet with THE Kumar Sanu? The teenage, music student me, wouldn’t have believed it …” she wrote in the caption.

Earlier, Parineeti Chopra has sung songs such as Maana Ke Hum Yaar Nahin from Meri Pyaari Bindu, Teri Mitti from Kesari, and Matlabi Yariyan from The Girl on the Train.