Series creator/showrunner Soo Hugh explains the “exhale” of Episode 8, earning some of its key moments, and the season’s postscript tribute.

For a story about decades of resiliency and endurance, it made sense to close Season 1 of “Pachinko” with perspective from 2021.

After eight episodes of chronicling the intertwining fates of an entire family tree, “Pachinko” turned its focus to Korean immigrants to Japan, namely the Zainichi women that left their homes as Sunja (Minha Kim) does during the Apple TV+ series’ opening season. Showrunner and series creator Soo Hugh originally envisioned these women’s stories to be the ending of the planned four-season arc for “Pachinko.” For various reasons, Hugh felt that the urgency of what they shared in their interviews couldn’t wait.

“As I was revising [Episode] 108, I thought about, ‘Am I going to get four seasons?’ And how many of the first generation are going to be with us still?’ They’ve lived a long life. So I started to feel this anxiety about interviews that if we didn’t do them in this first season, that I’m not sure we would ever get to see them,” Hugh said. “I really just felt it was important to see their faces. This show is fiction — I don’t want to ever say that this show is a documentary — but it’s built on the backs of people like these incredible women who lived.”

Those interviews, conducted last year by writer and historian Jackie J. Kim-Wachutka in Osaka and Kyoto, also connected with a visual idea woven throughout this “Pachinko” adaptation, one that represents how characters navigate between the worlds of the Korean and Japanese languages.

“What was amazing is we could not find a translator for the women. When we had a Korean translator, they would say, ‘I can’t understand them.’ When there was a Japanese translator: ‘I can’t understand them.’ It really was Jackie, who’s dedicated her life to bringing these women’s stories to the forefront. She’s the one that had to really go through them. That language is its own thing in itself. I knew I was going to color code the subtitles for the show. But that really inspired me to just really go for it with the yellow, blue, yellow, blue.”

That decision to bring in this documentary element to the season’s end is an effective counterpart to another idea that Hugh said she had for the show all along: Sunja’s final words of the season come as she’s selling kimchi in a local market to passersby like her, those longing for a piece of the home they left behind.

“It’s the very first thing I knew about the show, period. Even before I broke Episode One, I knew what the final scene was going to be,” Hugh said. “When you read the book, it just feels like, of course, the final scene of the entire first season was going to be Sunja going to the market and selling kimchi for the first time. You hear her voice call out, ‘Kimchi,’ and she’s fighting for survival. In some ways, once you know that, you’re just looking backwards and beginning.”

Bridging the distance between two points in time — Sunja making a new life in Osaka with her husband Isak (Steve Sanghyun Noh) and the Sunja of nearly 60 years later (played by Youn Yuh-jung) watching her grandson Solomon (Jin Ha) forge his own path — is a method that Hugh and the show’s writing staff talked about extensively. Given the freedom to establish the show’s “present” at any time and move into memories, sliding between each chapter in the lives of Sunja and those around her became a delicate balancing act. 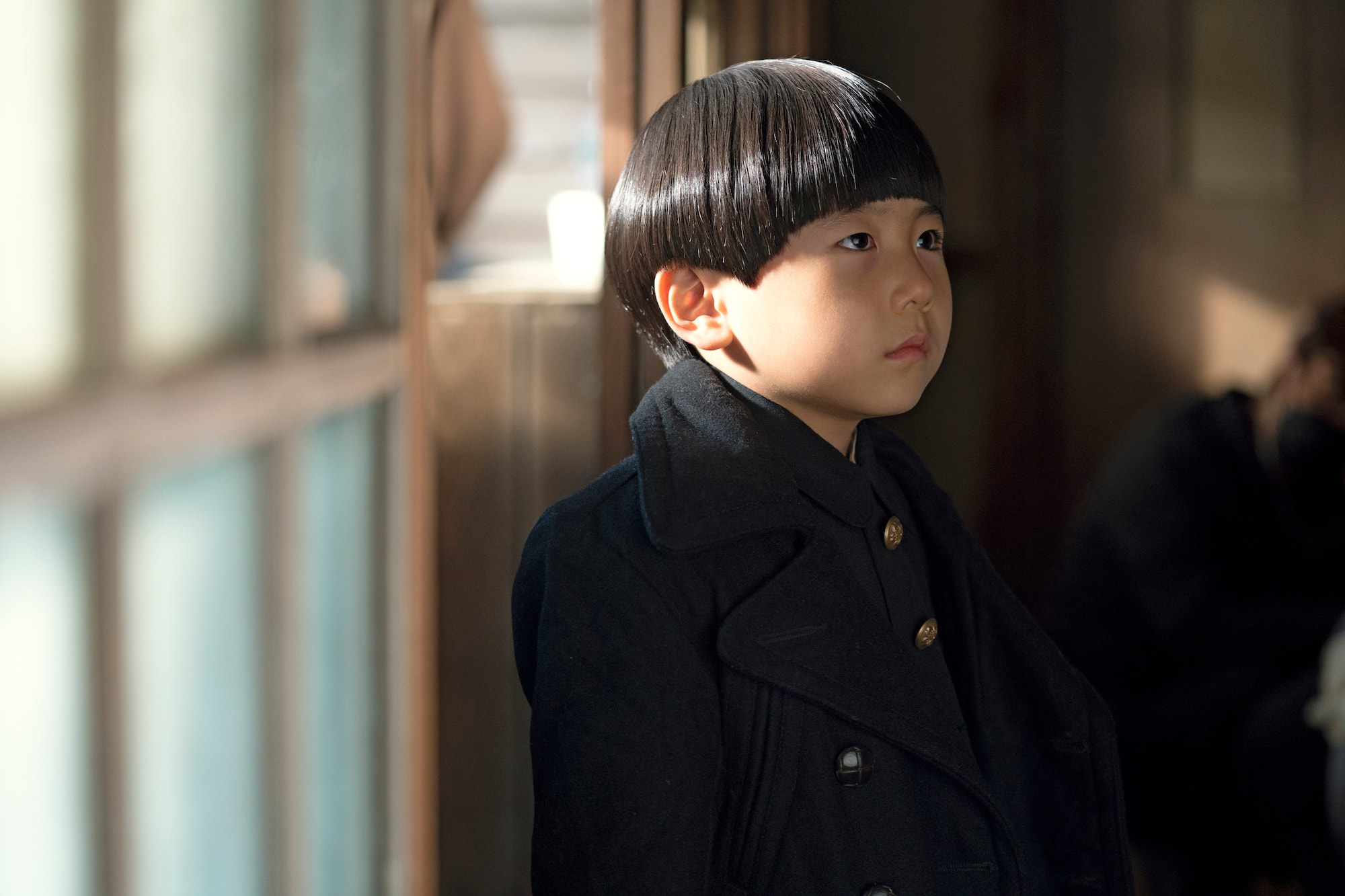 “This show uses three different edit languages to go between time. One is that connection of imagery where the same image connects one place to another. If you use it too much, it just becomes a gimmick. The second is that very, very long dissolve. The past stays on just a bit longer, almost like a ghost over the present. And a third are hard cuts. The two time periods are in clash with one another,” Hugh said.

It was one thing to find the visual language to move between the two. It was another to consider the totality of all the events that happen between any of these given ripples.

“Not only do we cross-cut time, we have to actually know everything that happened in between because it affected the present day. We realized in the writers room, we’re not just breaking one season, we’re breaking 80 years. That was a little bit daunting at first,” Hugh said. “We’ll also have time jumps where you leap forward in time. You teach the audience, ‘This is what you missed. This is the important part that happened while you were gone. There is now a one-year-old baby here.’ That was a really fun challenge, a puzzle to work out.”

Part of the creative success of “Pachinko” is the show’s ability to bring an emotional richness to a story structured and organized in this unexpected way. Episode 8 makes another gamble in having some of the pivotal scenes in the show’s past anchored by one of the ensemble’s youngest members. Young Noa (Jaejun Park) has to serve as a translator for Sunja, his mother, as the two of them try to locate Isak and free him from police custody.

“I am a sadist. When you think about this, I am asking a little boy not just to speak in Korean, which was going to be his native tongue. But this little boy has to speak most of his scenes in Japanese, right?” Hugh said. “The idea of finding a unicorn who’s gonna be perfectly bilingual, unless the cinema gods really favored me in that moment, I knew I was gonna put this kid through hell. But my God, how amazing was he?”

Decades later, Sunja and her family experience a different kind of loss as Hana (Mari Yamamoto) lies dying in the hospital. Episode director Justin Chon helps bring forward the ways that characters in “Pachinko” find other ways to communicate. Hana’s final moment of understanding with her mother Etsuko (Kaho Minami) comes with barely a word spoken between them.

“I think what I love about what Justin and Mari and Kaho did is that the camera doesn’t need to do much. It’s a very simple, locked-off camera because it’s a goodbye scene. If he had shot that with traditional coverage, it would have never worked,” Hugh said. “It feels like the audience is the interloper. I have this visceral reaction because I don’t feel like I have the right to be there. It’s such an intimate goodbye scene. And then you have Nico [Muhly]’s music. We tried different score pieces over that. That is the classic example of, if you do too much, you’re not going to feel anything. If you do too little, you’re not going to feel anything. It really had to be the Goldilocks music cue there.”

Though their interactions play out with minimal dialogue as Hana slips slowly into unconsciousness, the episode does make room for a more joyous sendoff. Solomon, with minutes to spare, wheels Hana to the rooftop so that he can give her a sliver of the Hawaiian vacation she’d mentioned in their past conversations. In going from the momentary chaos to the momentary joy of being outside of the sterile hospital room, Hugh found some help from Dan Mangan’s cover of “In the Aeroplane Over the Sea.”

“That was written into the script, because I am a huge Neutral Milk Hotel fan. I think Jeff Magnum has one of the most glorious voices in the world, but when we put the original version into the cut, it didn’t work with his voice. It just was too modern. I didn’t know what to do. And we tried score, but I still had that song in my head. So I just Googled ‘aeroplane over the sea cover.’ And that showed up. We put it in and it worked beautifully,” Hugh said.

On the day of the episode’s release, Apple TV+ announced that “Pachinko” was renewed for a Season 2. Much like the original plan for this opening season’s ending, Hugh said that there are portions of this saga that are immediately captivating threads to follow further.

“There’s just so much story to tell. I think about Sunja and where we left her. And I love Kyunghee. Kyunghee just has this amazing story in Season 2. And then in the present day, with Solomon, I just want people to understand like we’re watching a human being in formation. Season 1, he’s just clay. His storyline is meant to move at a slow-moving pace, because it takes place over one year. But it’s divided into four seasons. Sunja has the luxury of just going through time like a rocket. With Solomon, we’re going to get a final form at the end of the series with him,” Hugh said.

If “Pachinko” feels like a show that’s teaching you how to watch it, that’s partly by design. All of those cross-generational conversations here, especially where they pause in this season finale, are invitations to continue, whenever those new episodes may arrive.

“I hope that it feels like the end of one journey. But that doesn’t mean that we’re going to answer all your questions. I do hope that it feels like the end of something. But it should also feel that we left a lot of great questions on the table,” Hugh said. “We use the word cliffhangers a lot on TV. It makes total sense that with the architecture of a show, you want the audience to come back. I think for finales, it’s just my personal preference that I want it to feel like a long exhale. When you’re saying goodbye to a season, if you stack everything up to the very end, I’m not with them when they get to exhale. We’ve worked so hard on this show, so in the last 20 minutes, I want to be with the audience on the exhale.”

“Pachinko” Season 1 is now available to stream on Apple TV+.