By clinging to a classic America lie, the Byrdes find a bottom line they can live with… and others can’t.

[Editor’s Note: The following article contains spoilers for “Ozark” Season 4, Part 2, including the ending in the series finale.]

When the final season of “Ozark” begins, Wendy (Laura Linney) lays the family’s cards on the table. Hearing one too many wisecracks from Jonah (Skylar Gaertner), who’s still understandably upset over his uncle’s death, she snaps.

“You want to be a smart ass? You want to hate me? Fine,” she says. “[But] with our foundation — everything this family has sacrificed, everything — it’s going to at least give us the power to do whatever good we want to do. We can be the most powerful family in the Midwest, with the full endorsement of the FBI to boot.”

“People will find out where the money came from,” Jonah says, not yet backing down.

“You need to grow up,” Wendy replies. “This is America. People don’t care where your fortune came from, and in two election cycles, it’ll be just some myth, some gossip, some fucking cocktail party.”

The conversation ends there, as P.I. Mel Sattem (Adam Rothenberg) knocks on the same glass door he’ll later shatter in the series finale, but the weight of Wendy’s words never dissipates. The Byrde family matriarch is simultaneously telling the truth and lying her ass off. Veracity comes in how America typically protects the powerful and abandons the weak. Wendy has enjoyed that privilege long enough to recognize it. Sure, she’s also hiding behind the foundation, and the idea of doing enough good to bury the bad as a morally acceptable trade-off for seeking indomitable power. But she’s also lying to Jonah’s face because she’s not fine with him hating her, dismissing her, or otherwise distancing himself from the family. And the rest of the season shows just how far she’ll go to get him back.

“Ozark” ends just outside that same dining room, with the family coming together to vanquish one last threat, and Jonah committing, once and for all, to the parents he long tried to flee. As Mel holds the goat cookie jar in his hands, promising to go to the proper authorities with the ashes inside and expose the Byrdes for murdering Ben (Tom Pelphrey), Jonah emerges with a rifle. Over four seasons, Jonah has been preparing for this moment. He learns how to shoot. He holds Helen Pierce (Janet McTeer) at gunpoint. He unloads on the house’s glass walls after sifting through Ben’s ashes. Now, to end the series, he takes an innocent man’s life to shield his family — just like his parents taught him.

You needn’t spot Jason Bateman’s barely subdued grin to know Marty is proud of the boy he’s raised. It’s not because he’s grown comfortable with murder; as evidenced in Mexico, Marty is still squeamish when it comes to getting his hands dirty. Instead, he’s pleased with Jonah for mirroring his parents (similar to when Marty heard Jonah was laundering money and couldn’t hide his delight). He’s putting the family above all else. He’s willing to sacrifice his moral standing by shedding the blood of another, so long as it helps safeguard his own blood. He’s doing what Marty has been doing since they fled Chicago for the Lake of the Ozarks. By the time his parents are dead and Jonah’s running the RNC, no one will be wondering how he built his fortune. Generational wealth in America. There ya go.

Unlike his folks, “Ozark” takes zero satisfaction in Jonah’s development. Valuing blood relations over chosen family — over loyalty that’s earned rather than inherited — is painted as the ugly act that it is, given how the final gunshot contrasts the one that preceded it. Marty and Wendy prioritize their guaranteed safety, as well as their kids’, over Ruth (Julia Garner), who was as close to family as she could get without changing her surname to Byrde. After fighting with Wendy over protecting Ruth’s life (when she was deadset on taking her revenge on Javi), Marty finally relents his claim to the lone remaining Langmore. Not only does he do nothing to warn her that Camila (Veronica Falcón) knows what Ruth did and is coming for her, he actually comes after her himself to start the last episode. If she won’t help him get his kids back, then he’s going to tell Camila what Ruth did himself. The result would be the same as what plays out.

It’s fitting, then, that Ruth spends much of the final episode communing with the dead. First, she spots Wyatt (Charlie Tahan), as she buries her would-be assassin. Later, she pictures her family returning for one last cookout. Her father, Cade (Trevor Long), mans the grill. Uncle Boyd (Christopher James Baker) lights a firecracker. Uncle Russ (Marc Menchaca) plays the guitar and growls the lyrics to John Prine’s “Angel from Montgomery,” as Ruth and Wyatt sit atop their trailer for one last talk. The song lingers in the background, but its lyrics are given prominence during the gaps in conversation with Wyatt and then Three (Carson Holmes). “Just give me one thing that I can hold on to,” Russ sings, “to believe in this living, is just a hard way to go.” 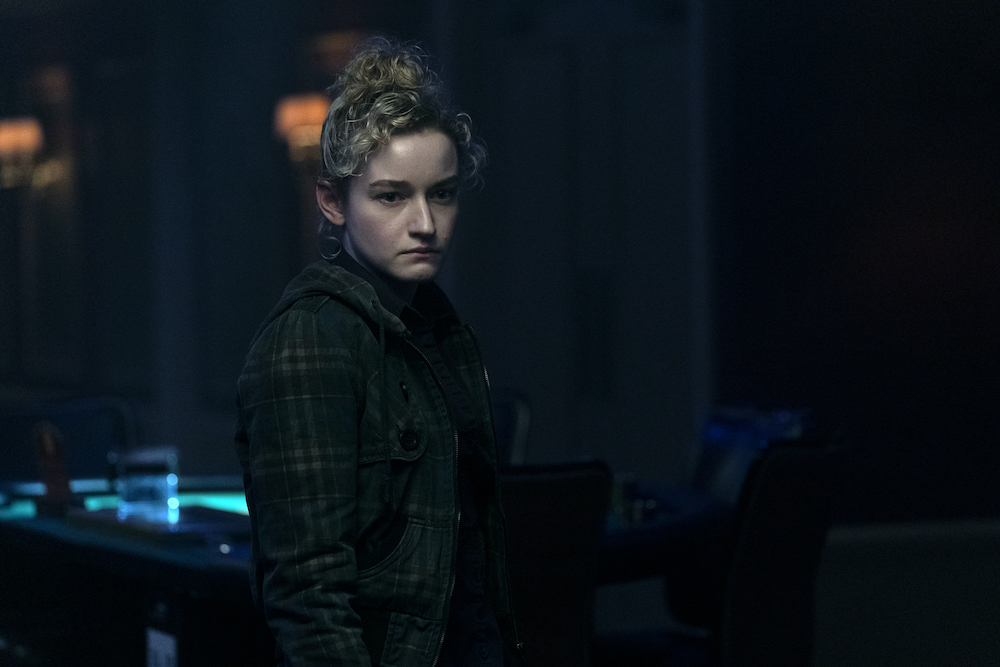 Prine wrote the song imagining a woman who “feels older than she is” and wants to escape her difficult life. Ruth has certainly lived beyond her years — no one her age should have had to bury as many family members as she has — but she’s not exactly looking to get out. She turns down Marty’s offer to flee town under a new identity. She’s building her dream house in the same place she grew up. She’s not harboring hope that she’ll die in order to be reunited with her family, even if believing she could be makes her untimely passing easier to bear. Showrunner Chris Mundy, who wrote the episode, and Jason Bateman, who directs a slow, sweet, sweeping shot through the yard, craft this moment as tender and tragic at once. By acknowledging the spirits of her deceased family members, Ruth’s death brings them back together. But emphasizing her attempt to start over, to rebuild from the ashes of so many lost souls, drives home the episode title: “A Hard Way To Go.”

Like every prior episode, the “Ozark” series finale featured four key symbols in its opening title card. There’s the grill, alluding to Ruth’s family gathering, and the broken glass, which foreshadows Mel’s break-in prior to the final scene. The coffee pot speaks to Camila’s importance to the episode. (She shows up for a morning cup with Marty and again brings up her son’s death.) Then, finally, there’s a bow tie. Plenty are spotted at the party — or as Wendy probably prefers to remember it, the Byrdes’ “goddamn coronation” as the Midwest’s top political power — and I’m sure “Ozark” fans with better memories than I will find further links to the symbol.

But for me, the telling part of the bow tie isn’t the bow but the tie; it’s not Marty’s dapper tuxedo, or any of the penguin suits playing poker, but Jonah stepping into the hallway in a full suit, presenting his formal attire to the family. In that moment, Jonah is in. Wendy has won. Her plea at the mental hospital worked. She told her kids, “Your dad and I were trying to build something for all of us, and I promise I will not trap you inside it.” But opening the trap and allowing the prisoners to choose to stay inside, well, that’s the most effective trap of all. I would argue Wendy knew it, too.

And she knew the lock was set as soon as Jonah looped his tie around his neck, donned the requisite formal wear for his parents’ big night, and stepped in front of them for approval. No matter what was asked of him after that point, Jonah was going to do what the family needed. As Ruth said later, he “looks like a grown-ass man.” But he’s still a boy, shaped in the image of his father, taking up the mantle, even as the fires of hell licked his tails.

Family above all else. From Marty’s desperate deal that sent the Byrdes southward to Jonah’s fateful shot, that’s what “Ozark” chose as its ultimate focus — paired frighteningly with the rising body count and general destruction that results from such selfish, single-minded thinking. In a time when people are looking beyond borders, the problems with how the Byrdes sought and found safety couldn’t be clearer. Sitting at that dinner table, Wendy emphasizes “everything this family has sacrificed.” She sees the stress, the fear, the death, all of it, as something she, her husband, and her children have suffered through. But they’ve inflicted suffering on others. They haven’t sacrificed, but made others sacrifice for them.

“This is America.” The Byrdes do get to win. Wendy sure was right about that.

“Ozark” Seasons 1-4 are available on Netflix.