A post shared on Instagram shares the story of Ibrahim Qadri, a person with an uncanny resemblance to Bollywood’s badshah Shah Rukh Khan. We bet that you will have to look twice before figuring out who the real Shah Rukh Khan is.

Are you stuck at the picture we gave above? Well, trust us. This is not Shah Rukh Khan at all! We know, that this man’s facial features are strikingly similar to Bollywood’s King Khan, but let us assure you that this is a normal person just like us. However, life was not that simple for Ibrahim Qadri. A post by Humans of Bombay detailed how Qadri’s resemblance to SRK brought him fame as well as the reason for getting mobbed.

Shared on YouTube, the post shares Qadri’s experience after he hit puberty and his friends started calling him SRK. “’You look like Shahrukh Khan!’ My parents were especially proud of the fact that they gave birth to a kid who had an uncanny resemblance to India’s superstar. I couldn’t help the attention I got & frankly, when puberty hit, I started looking exactly like SRK! And that’s when the madness began; after my friends & I watched ‘Raees,’ everyone started mobbing me for selfies thinking the real SRK had made an appearance for the film’s premier!” read a part of the post.

Qadri even described how he had to call the police to help him get out of a cricket stadium as people surrounded him and almost tore his shirt to get a selfie.

Read the post to find out the full story:

Since being shared, the post has garnered over 124k likes and tons of reactions. While some were taken aback at the uncanny resemblance, others resonated Qadri’s words and commented on how hard it must be for SRK to go to a place without getting mobbed by fans. 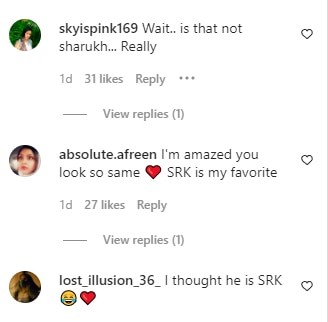 Are you still processing how identical SRK and Ibrahim Qadri looks?