Netflix’s drama series Anatomy of a Scandal goes back to the same scene, over and over again. However, once is far too much, a dangerously gratuitous representation that proves we never need to see rape on screen like this, ever again.

Developed by David E. Kelley and Melissa James Gibson from Sarah Vaughan’s novel, the limited series was instantly one of the most streamed shows after its April release, which also happens to be Sexual Assault Awareness Month.

In the political thriller-meets-courtroom drama, Conservative MP James Whitehouse (Rupert Friend) tells his wife Sophie (Sienna Miller) of his affair with parliamentary aide Olivia Lytton (Naomi Scott), on the eve before the story breaks in the tabloids. Whitehouse is described by his schoolboy mate — conveniently, also the prime minister — as a “popular” MP who is “the most naturally gifted politician,” not to mention top of the sexymp.co.uk list, which the PM remarks must surely be a first for the Conservative Party. As the prime minister’s communication director warns him that if Whitehouse “gets full-on Me Too’ed,” his loyalty will appear “ill advised,” the PM insists he’s going to stand by his buddy through the scandal. 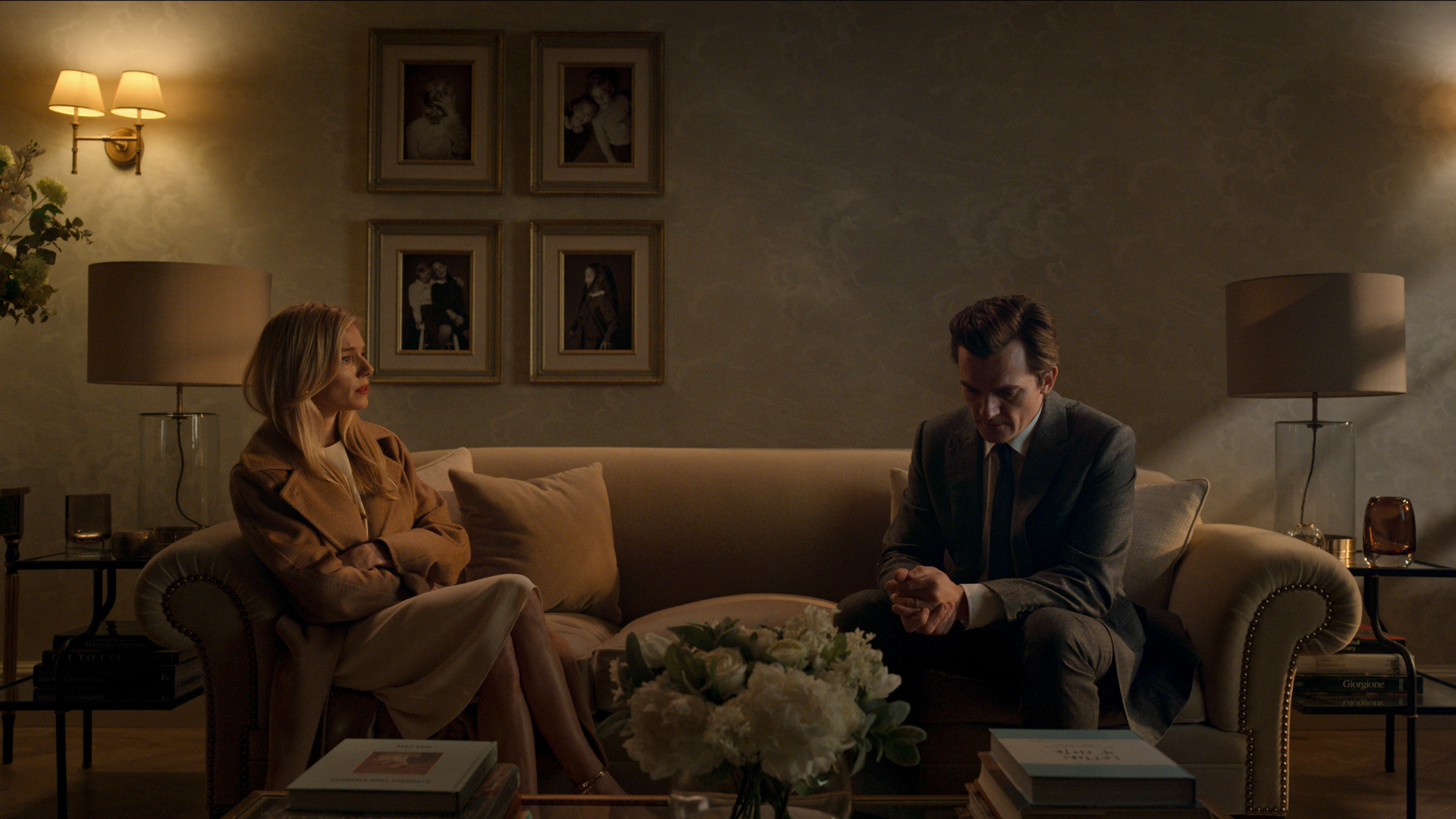 The Whitehouses: Sophie Miller and Rupert Friend as Sophie and James.
Credit: Netflix

But an affair making the tabloids turns out to be the least of Whitehouse’s worries, as the police tell him Lytton has accused him of rape. Whitehouse is then quite literally “gut-punched” by the accusation, sent flying backwards into the air in a scene that should go down in history as one of the most ridiculous visual decisions ever to be made on TV.

What unfolds is a drama that centers around sexual assault in a lazy, gratuitous manner, its titillating depiction showing exactly why it never needs to be seen on screen again.

With director S. J. Clarkson at the helm, Anatomy of a Scandal repeatedly depicts the assault during the series. The primary case in question happened in an elevator in the House of Commons, and over and over throughout six long episodes, the show cuts back to this scene, even opening with it. From the first moments of Anatomy of a Scandal, rape is sensationalized, glamorized, and exploitative. Heavy breathing, hair swirling, sounds of torn fabric. A breathy 5 Alarm song playing as the lyrics sing, “Desire takes over, lost all control, how the mighty fall.” 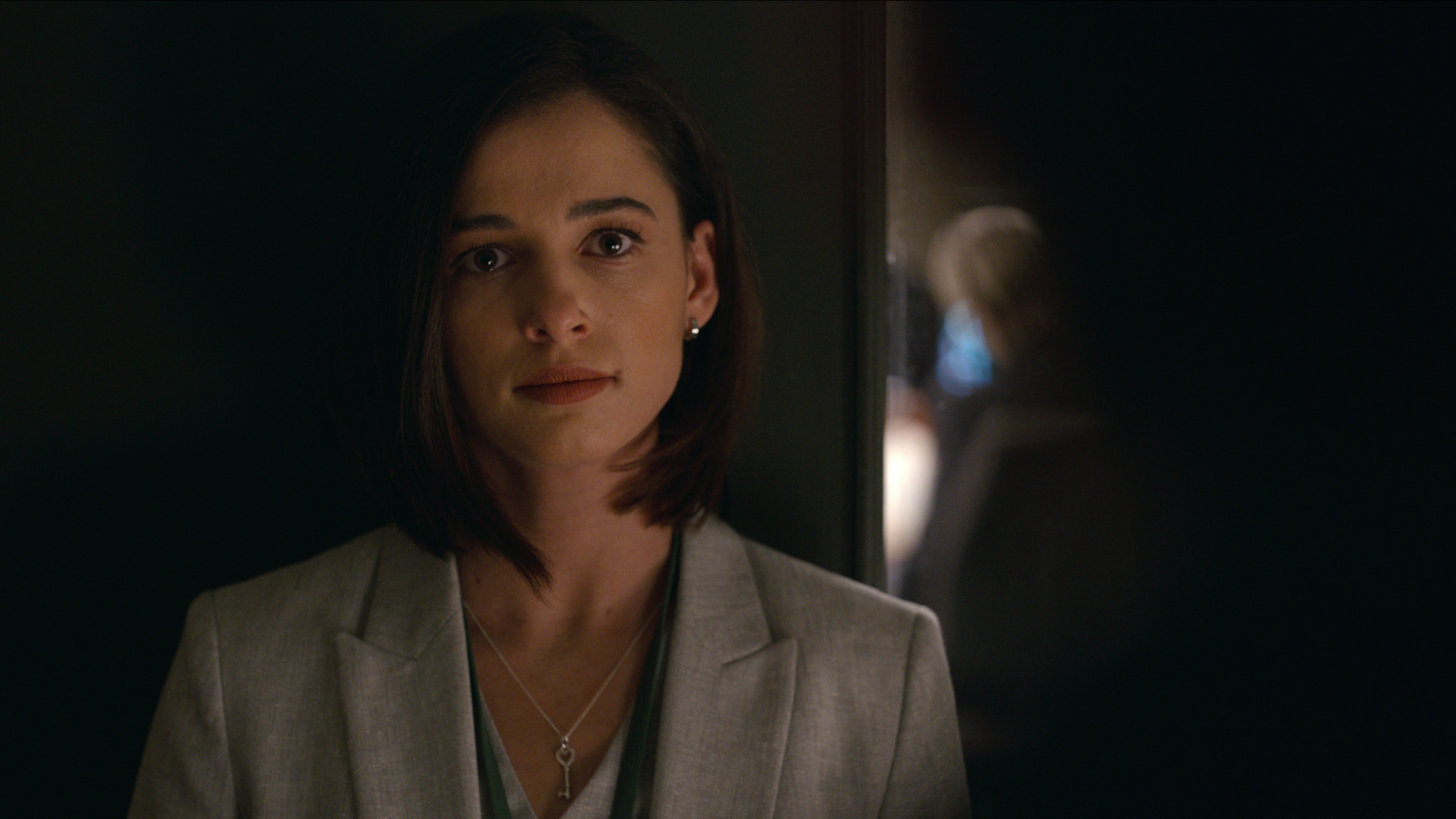 This scene is continuously replayed. In the courtroom, it plays out for long stints of the narrative, focusing on the victim’s face during the attack. But it doesn’t end here. A second onscreen rape happens when Whitehouse is back at university, in his privileged heyday of spraying champagne and destroying rooms with his “Libertine” mates. Once again, assault is gratuitously depicted, this time with even more shadows and blur, as if the camera itself is supposed to be drunk. Clothes ripping, a woman gasping, more heavy breathing, all in a darkened moonlit cloister of an Oxford college. The viewer again stays with the victim’s face.

TV shows and film should never fetishize or glorify sexual violence, which is exactly what Anatomy of a Scandal does, with an exploitative and extremely damaging misrepresentation that upholds rape culture — in which the crime is normalized and trivialized, and survivors are blamed for violence committed against them.

Even after #MeToo, research reveals ‘alarming’ attitudes to consent and sexual assault

Accurate representation matters. We form our concept of reality through narratives, including cinematic, that produce the effect of reality. Tanya Horeck examines the “link between real and represented rape,” in her book, Public Rape, investigating how depictions of rape in film and TV inform our real world beliefs of what rape “looks like,” as well as how we create stereotypes of victims and rapists. Importantly, we formulate what is real from these representations, and furthermore, we judge real experiences against the fictional. In Monica Chau’s book The Subject of Rape, Hannah Feldman discusses how the representations of rape reveal the paradigmatic schism between a factual event and its pictorial rendering.

It’s in this depiction of events that shows like the Anatomy of a Scandal do severe damage. When a show watched globally by millions shows sexual assault as a titillating, aesthetic, male gaze-y, stylized, it creates a false representation, and may even desensitize viewers to said violence. As the New York Times‘ Lisa Damour writes, “Fictional rape scenes may help shape how viewers think about actual sexual violence in the real world. Even a single exposure to dramatized sexual assault — such as what many young people now see — has been found to influence attitudes and inclinations.”

Rape has also long been used on screen as a shortcut to dramatic plot, a way to develop backstory, “edginess,” and motivation for male protagonists as avengers. Graphic scenes of assault are constantly included in order to justify violence against the perpetrator (Game of Thrones), motivation for a character’s journey (The Handmaid’s Tale), or oftentimes that third party looking for vengeance (True Detective).

What is the point of making the audience watch this elevator scene over and over in excruciating slow-motion?

Sexual assault should always be questioned and interrogated whenever it is included in television and film narratives. Was it actually needed for this story? Why? Why must you show it on screen?

The writers, producers, and directors of Anatomy of a Scandal should have asked these very basic questions. What is the point of making the audience watch this elevator scene over and over in excruciating slow-motion? Perhaps it was simply meant to shock the audience, or make them consider the ongoing nature of consent and “grey areas.” But all of this could have been more powerful without depicting it at all. Including it brought nothing new or nuanced to the show whatsoever — nor did it add value to our cultural conversations surrounding sexual violence or towards changing our culture for the better.

Over the past few years, there has finally been a shift in how rape is used in screen narratives. Notably, Michaela Coel’s I May Destroy You, which shows the assault, Emerald Fennell’s Promising Young Woman, and Netflix series Unbelievable are great examples of handling assault with care, with each challenging how these stories have traditionally been told. Survivor-focused narratives like these have shown the true realities of sexual assault, but also of who the assailant can be, who victims are, and the aftermath.

Instead of taking a lesson from shows that centered survivor narratives, Anatomy of a Scandal completely ignores them. The first time you see Lytton in the show, it is from the viewpoint of Whitehouse’s wife, Sophie. In no way is Sophie the victim of this violation. In no way is Whitehouse, either, flying through the air post-gut-punch. 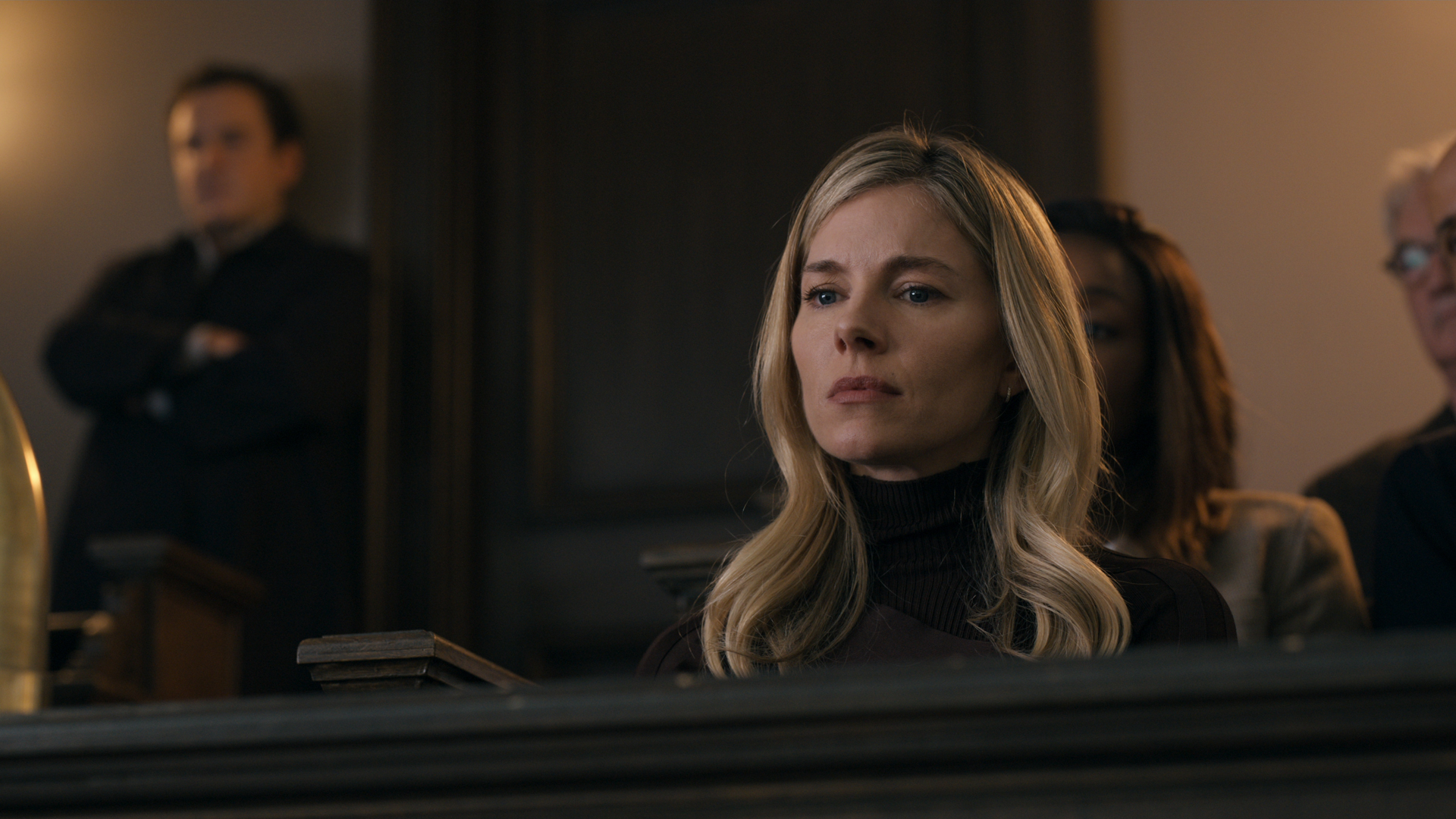 In fact, Lytton’s viewpoint is almost never seen, only briefly heard in the court scenes and plagued by grotesque flashbacks. What was it like after she spoke in court? Especially after being viciously grilled during the cross-examination? Survivors often endure a second victimization by the system when seeking legal justice. Some shows, like Unbelievable and HBO’s The Girl Before, have shown the cruelties of the legal system, and how women are let down by the systems that allegedly are supposed to give them justice, instead only inflicting more trauma.

Even when the verdict is read, Lytton is nowhere to be seen. By then, the victim and the avenging individual have merged into prosecutor Kate Woodcroft (Michelle Dockery), who we find out was raped by Whitehouse at Oxford in the 1990s. Though Lytton’s case is front and centre, she’s given a shocking lack of agency — the show even ironically has Woodcroft asking verbatim, “What kind of agency did she really have?” In both the show and the case, the answer is none. 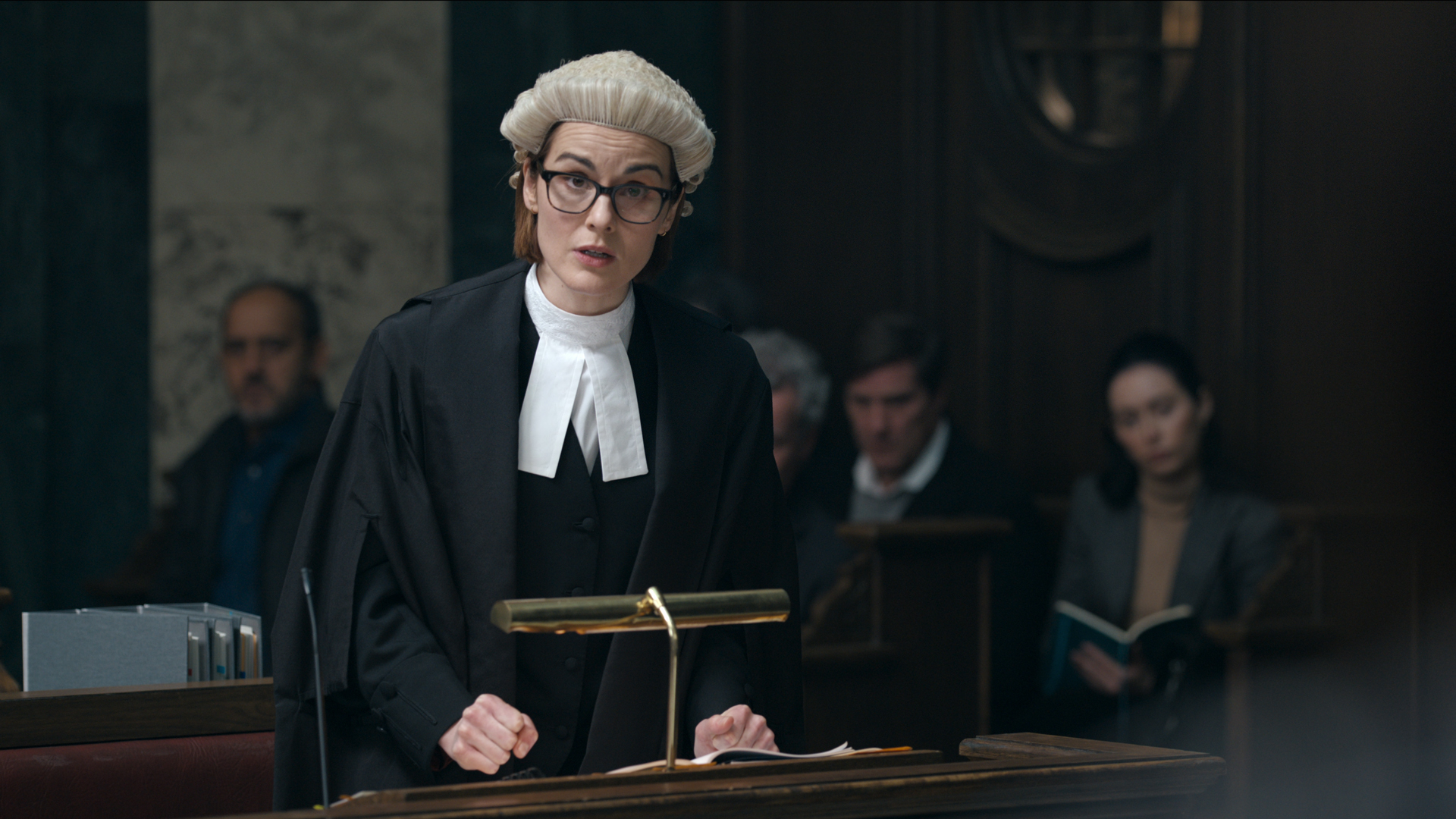 Anatomy of a Scandal‘s detrimental portrayal is especially harmful to those who have survived sexual assault. Rarely discussed is the effect this has on survivors, forced to watch their worst nightmares play out on screen. Anatomy of a Scandal had the opportunity to respect this, and to dive into extremely important issues including consent, relationship rape, the devastating lack of convictions for assault, just to name a few, but it failed to do so in a meaningful way.

For one, the show does try to expose power dynamics and how men with this much wealth, power, and influence can get away with anything. Whitehouse quite literally carries around a “get out of jail free” Monopoly card in his wallet. He’s above the law, always winning the game — his children even chant that Whitehouses “always come out on top.” However, the show’s ending tries to convince you that justice was served. But really, isn’t it saying that if you’re assaulted by an entitled, powerful man, you’d better hope he committed some other crime that he’ll be held accountable for, because he’s definitely not going to be held accountable for this? In what world is that justice for survivors?

Anatomy of a Scandal relies on old, lazy tropes, and chooses to lean on a glossy, exploitative manner that ultimately upholds rape culture and downplays the realities of rape and sexual assault. We need the representation of assault to be constructed by the realities of it, to center survivor stories, steer a change in discourse, and subsequently help to eradicate sexual violence from our society. We don’t need it to be shown on screen like this.