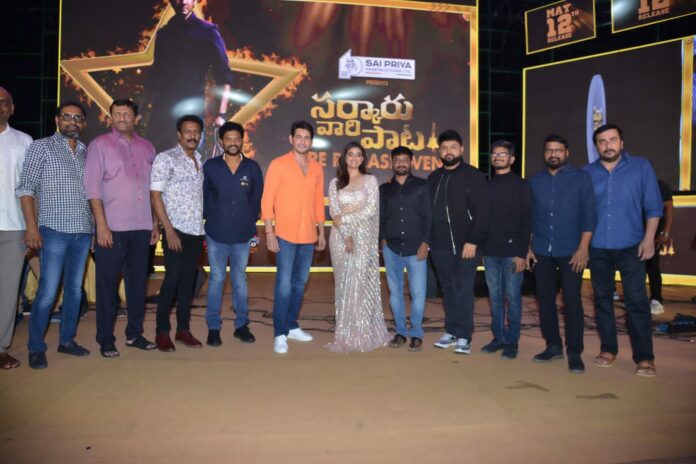 Sukumar informed that he watched Ma Ma Mahesha song in editing table and he watched it on loop. He made a statement that Mahesh Babu makes directors feel like kings on sets. He said Kalaavathi and Ma Ma Mahesha are his favorite songs in the album.

Director Anil Ravipudi predicted that Sarkaru Vaari Paata will become much bigger hot than Sarileru Neekevvaru. Gopichand Malineni lauded director Parasuram for presenting Mahesh Babu in a stylish and energetic role. Buchi Babu and Vamsi Paidipally too wished the team all the success.

Parasuram revealed that it was director Koratala Siva who helped him to reach and narrate the story to Mahesh Babu. “When I approached Mahesh Babu to narrate the story, I was very tensed. But that smile in his face, after 5 mins after I started the narration, gave me the confidence. Mahesh Babu told me that he wanted a biggest blockbuster. I gave my best for the film. I assure all of you that we are going to deliver a blockbuster on 12th.”

Keerthy Suresh delivered her speech thanking Parasuram for giving her the character Kalaavathi. She said she had tensions while shooting, dubbing and even to speak at the event. She said Mahesh Babu’s timing, glamor and fans frenzy as the reason for her tensions.

Mahesh Babu looked extremely confident about the movie. He thanked Parasuram for designing such a character for him. “It’s been almost 2 years, since we celebrated a movie event. I should first thank Parasuram for designing my character extraordinarily. I thoroughly enjoyed working for the film. Shooting for few scenes reminded me of Pokiri days. Editor Marthand too use to say that we are going to score much bigger hit than Pokiri.

Parasuram told me that he came to Hyderabad to direct movies, after watching my Okkadu. He will be one of favourite directors of my fans and my dad’s fans. Hero-heroine’s track will have repeat audience. There are many other highlights in the movie.

Keerthy is an amazing co-star. Thaman has given wonderful music. I’m a big fan of his background score. He’s like a brother to me.”

Mahesh Babu turned very emotional, when he said he lost his closed ones in recent times. “A lot of changes happened in last 2 years. I lost some of my closed ones. I wish, your (fans) love will stay with me forever.”