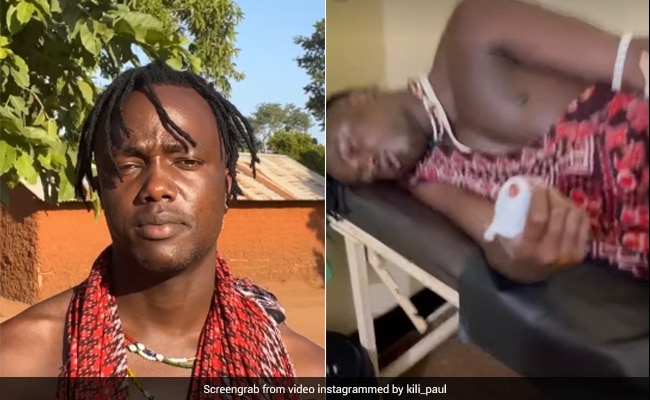 Kili Paul was posted a video after he was attacked.

Kili Paul, internet sensation, was attacked by unidentified individuals with knife and also beaten with sticks. He shared a video on his Instagram stories, which shows him lying on a stretcher with a bandage in his thumb and injury marks on his legs.

There is no information about how Paul was attacked.

The Tanzanian content creator is known for his videos of lip-syncing and dancing to Hindi movie songs along with his sister Neema.

He was honoured by the Indian High Commission in Tanzania in February this year. He had posted about the award on his Instagram handle.

Paul was also praised by Prime Minister Narendra Modi during his Mann Ki Baat address in February. Talking about the work of Kili Paul and his sister, PM Modi called upon youngsters to make videos of famous Indian songs in different languages. He said this will not only make them popular but also showcase the country’s diversity to the new generation.

The artist shot to fame after his lip-sync video on the song “Raatan Lambiyan” from Siddharth Malhotra and Kiara Advani-starrer “Shershaah” with sister Neena Paul went viral on social media last year.

Since then, he has posted numerous videos where he is seen lip-syncing to popular songs from Hindi movies and that has helped him amass 3.6 million followers on Instagram.

He is followed by popular Indian film celebrities, including Ayushmann Khurrana, Gul Panag and Richa Chadha.

Kili Paul’s Instagram profile describes him as a “dancer and content creator”. He also has a YouTube channel where all of his popular videos are posted.