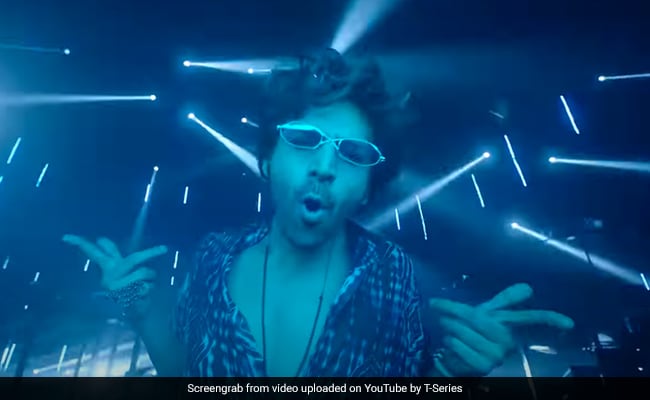 Kartik Aaryan in a still from the song. (courtesy: YouTube)

The makers of Bhool Bhulaiyaa 2 shared the first track from the film on Monday. The title track is all about Kartik Aaryan ruling the dance floor. He is the life of the party as he breaks into a routine with some smooth dance moves. The track has been sung by Neeraj Shridhar and it has been recreated by Tanishk Bagchi and the choreography is by Bosco – Caeser. Throughout the course of the video, Kartik Aaryan is seen dancing his heart out with multiple outfit changes. He aced the hook step, which he called the ‘ZigZag step.’ The original track featured Akshay Kumar. Sharing the video, Kartik Aaryan wrote in his caption: “Do the Zig Zag step with Rooh baba! Bhool Bhulaiyaa 2 title track out now.”

Check out the title track here:

Earlier, Kartik Aaryan had asked his fans to suggest a name for the hook step of the song. “Let’s give a name to the hook step. Suggest karo…So blessed to work with the best Bosco Martis sir on this one,” he captioned the post.

Bhool Bhulaiyaa 2 is the second installment of the popular 2007 horror comedy Bhool Bhulaiyaa, which starred Akshay Kumar as a psychiatrist. Shiney Ahuja featured as his friend and Vidya Balan played a character with split personality. She was critically acclaimed for her portrayal as Manjulika/ Avni. The film also featured Amisha Patel, Paresh Rawal, Manoj Joshi, Rajpal Yadav and Vikram Gokhale in pivotal roles.

Directed by Anees Bazmee and produced by Bhushan Kumar’s T-Series, Bhool Bhulaiyaa 2, also starring Tabu, Kiara Advani and Rajpal Yadav, is slated to hit the screens in May 20.