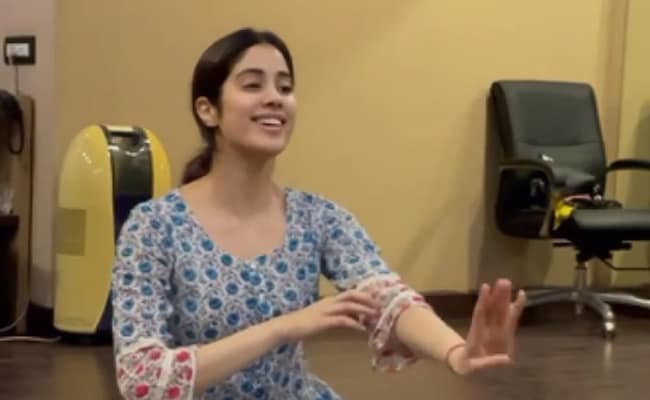 A still from the video. (courtesy: janhvikapoor)

Janhvi Kapoor has recreated Rekha’s iconic song, In Aankhon Ki Masti, from the movie Umrao Jaan, in a recent Instagram post. Well, we all know Janhvi’s classical skills, and often she shares videos from her rehearsals. In the recent video, the Roohi actress can be seen sitting on the floor in a floral Anarkali suit. Showing off her no-makeup look, the actress’ expressions were graceful. Sharing the throwback video, Janhvi captioned it as, “#tb to 2 years ago, one of my first (baithaki bhav) attempts. Miss it 🙁 Happy international dance day everyone! Even though I’m 2 days late”.

On Saturday, Janhvi Kapoor treated her Insta family to a glamorous post. In the picture, she wore an orange coloured short dress and styled her hair. Check out below:

Earlier, Janhvi Kapoor, during a cover shoot with Filmfare, revealed her relationship with half-siblings Arjun Kapoor and Anshula Kapoor. She said, “I think having Arjun Bhaiya and Anshula Didi as a part of our lives has made us more secure and stronger individuals. For the lack of a better word, I feel more wholesome. At a later stage in life, we got two more siblings. I don’t know who else can say that, and I think that I’m extremely lucky, and it doesn’t get better than that.”

Meanwhile, on the work front, Janhvi Kapoor will be next seen in Good Luck Jerry, Mili, Mr and Mrs Mahi with Rajkummar Rao and Bawaal with Varun Dhawan.