Sidharth Malhotra and Parineeti Chopra collaborated for the comedy-drama Hasee Toh Phasee in 2014. After the success of the film, They both managed to enchant their fans with their sizzling on-screen chemistry and friendship. 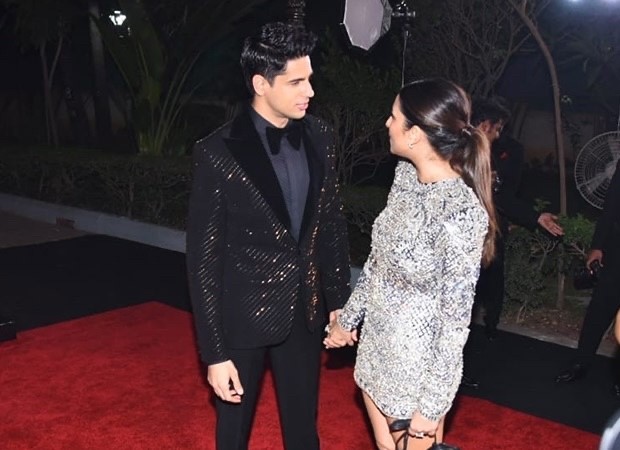 At Karan Johar’s recent birthday party, Sidharth looked handsome in his tuxedo as he made a stunning entrance at the birthday bash. He wore a black shirt with a black blazer with silver blingy stripes for the event, which looked like a party in and of itself.

He completed his ensemble with black fit trousers and nailed it. His ensemble is from the shelves of ace designer Manish Malhotra He completed his ensemble with black crystal-encrusted shoes by Louboutin and a black velvet bow tie, as well as a slick pushed-back hairdo and a clean shaved appearance. And on his way inside after posing for the cameras, Sidharth ran into Parineeti. Parineeti and Sidharth exchanged a warm embrace and a heartfelt chat while having a good laugh.

Parineeti was dressed to her finest in an embellished dress by Falguni & Shane Peacock. The full-sleeved dress had a round collar and a thigh-length hem with heavyweight bead and sequin embroidery in silver. Pari accessorised her look with a pair of silver kitten heels and dainty silver earrings. She completed her appearance with little make-up, which included a warm brown lip-stick and kohl-rimmed eyes. She wore her hair open with the middle part.

In terms of work right now, both Sidharth and Parineeti have a lot on their plate career wise. Sidharth Malhotra has quite a few interesting projects in the pipeline. He will be seen in the spy thriller Mission Majnu alongside Rashmika Mandanna. He also has Thank God with Rakul Preet Singh and Ajay Devgn. Apart from this, Sidharth will feature in Dharma Productions’ aerial actioner Yodha with Raashii Khanna and Disha Patani. He recently announced his digital debut Indian Police Force with Rohit Shetty. While Parineeti Chopra will next star in Unchaai with Amitabh Bachchan, Anupam Kher, Boman Irani among others.