Lock Upp has become one of the most successful reality shows on OTT. The show, which is streaming on ALT Balaji and MX Player, is hosted by Kangana Ranaut, and soon the finale of season one will take place. Currently, contestants like Munawar Faruqui, Payal Rohatgi, Saisha Shinde, Anjali Arora, and Prince Narula are making a mark in the show, and on social media, there are multiple trends like ‘Munawar For The Win’ and others. Now, Ekta Kapoor has given an interesting update about the show. Also Read – Drew Barrymore apologises after laughing over Johnny Depp-Amber Heard’s trial; says, ‘I will grow and change’ [Watch Video]

Ekta on her Insta story shared, “I hear there is crazy bets N odds For D #LockUpp Finale! Multiple people have told me this today! Trust me on 7th May the best man/woman will win.” Also Read – Palak Tiwari’s fitness secret revealed; from strict diet to intense workout, Bijlee girl’s schedule will leave you inspired 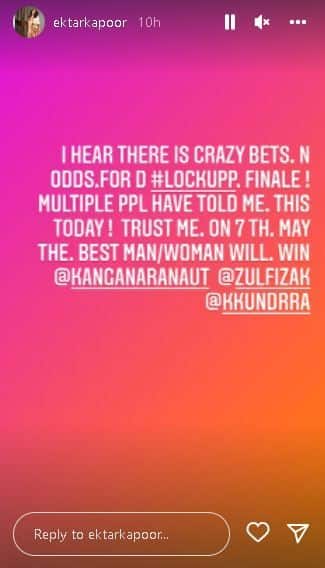 Recently, she also revealed that she had become suicidal. Payal on the show said, “There was this love angle, which was very detrimental in my personal life. Got heavily into drinking. I used to drink for 48 hours. I used to be on prescribed drugs. I used to be suicidal. I have tried to cut my hands.”