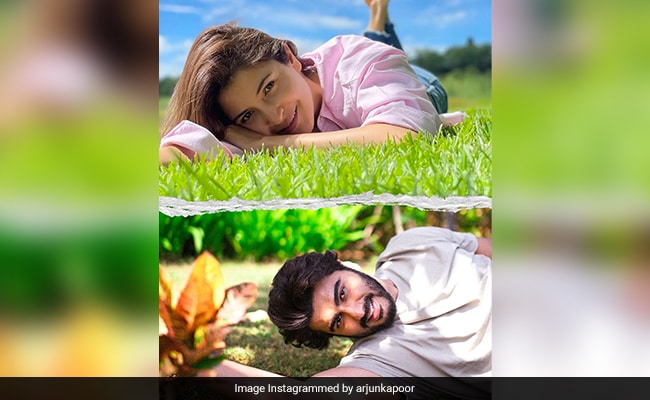 As Anushka Sharma celebrated her 34th birthday on Sunday [May 1], wishes and messages poured in from all quarters. In addition to her family and fans, colleagues of the star also shared their heartfelt wishes on the special day. Among the hundreds of birthday notes that Anushka received if we had to pick the most innovative one, Arjun Kapoor would emerge as the clear winner. On the occasion, Arjun Kapoor shared a photo collage of two pictures – one featuring Anushka and the other with him. Here, Arjun Kapoor seems to be recreating Anushka’s pose – one where she is laying down on the fresh green grass.

Replying to the picture, Anushka Sharma wrote, “I know that this picture of you was already in your photo albums.”

Not one to back down, Arjun Kapoor said, “Anushka, you were my reference when I made them take this picture…Wanted to pay you a proper tribute.” Soon, Anushka Sharma responded, “It’s a tribute!”

That’s not all. Arjun Kapoor also added, “Tu photo detail main itna na jaa, mera emotion dekh yaar… [Don’t get into the details of the photo, focus on my emotion].”

Anushka Sharma then said, “Details mein jaana is my forte. Your caption alternative- ‘Happy birthday, Anushka. May the grass on your side always be green and may I always be blessed with your friendship to remind me to water mine !’- there! You’re welcome!”

To this, Arjun Kapoor replied, “Anushka, chal now we know you can be a translator if I ever watch Virat Kohli batting with Hindi commentary…Thanks a lot…”

Actress Patralekhaa reacted to the post saying, “That’s such a sweet birthday wish,” with a heart emoji.

On her birthday, Anushka Sharma also shared a set of pictures in which she is digging into her birthday cake.  In the caption, she wrote, “I feel happier, more loving, more understanding, taking myself less seriously, listening more, finding joy in less, able to let-go better, more accepting of myself and others AND situations, feeling more beautiful, expressing feelings more easily, valuing my own opinion above others … This getting older business is going great! Everyone should try it. Thank you for all the wishes and love you’ve sent my way. I’m so grateful. PS – I ate the biggest slice of my birthday cake. As it should be.”

On the work front, Anushka Sharma will be seen in Chakda Xpress. Meanwhile, Arjun Kapoor will appear in Ek Villain Returns, Kuttey, and The Lady Killer.