Kangana Ranaut has impressed American writer Chris Gore with Dhaakad, and the latter expressed his opinion about the film on his Twitter. Chris has appreciated Ranaut’s actioner, and he even said that Marvel’s Black Widow starring Scarlet Johanson, should have been along the lines of Dhaakad.

In his tweet, Chris shared the Dhaakad trailer and said, “This is what the Black Widow movie should’ve been.”

This is what the Black Widow movie should’ve been. #DhaakadTrailer #Dhaakad https://t.co/edZIbpq2Tj
— Chris Gore (@ThatChrisGore) April 29, 2022

Kangana is quite active on Instagram, and she noticed Gore’s appreciation. Kangana shared the writer’s tweet on her Instagram stories and reacted to his comment by saying, “I said na Indians sab mein best hain.”

Check out Kangana’s reaction to Chris 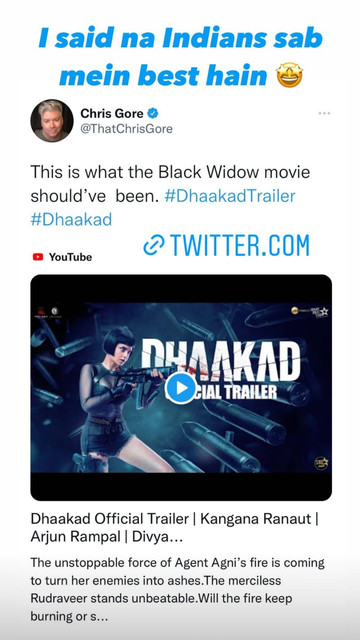 Yesterday during the trailer launch, Kangana said that she has always envisioned this day, and she had to take big risks to reach here. Kangana said, “I have my own fair share of low points when I refused a lot of male-centric films. A Khan lead film or Kumar lead film or all kinds of big hero films, and everyone looked at me like ‘why am I wasting my life.’ But when you have a vision for your future, and nobody else does, they think that there is something wrong with the person.”

Kangana asserted that she used to get calls from people asking her reasons behind rejecting big films, and award functions and Kangana had an impressive reply to them. “I used to be amazed at them thinking that why do think that I’m wasting my life. I have come here so far, and it wasn’t accidental. I always thought that I also deserve as much anybody else, and why should I think of myself as a lesser being. Ranaut further added, “I always have this vision that this day is possible. I did not plan it, but I have the vision. I can’t execute it alone, you need a producer like Deepak (Mukut) ji, a director like Razy (Razneesh Ghai), it is a collective effort of teamwork.”  The Queen star believes that “The world is ready for women to take the lead.” Dhaakad will release on big screens on May 20.