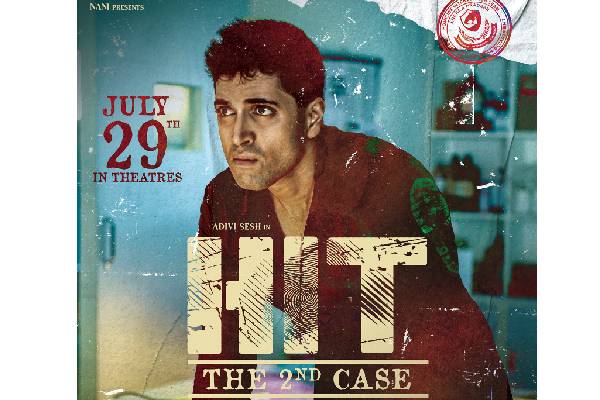 The second instalment of HIT (Homicide Investigation Team) is coming to thrill us once again on July 29. HIT 2 is produced by stylist Prashanti Tipirneni and presented by actor Nani for their production banner Wall Poster Cinema. The new HIT will be headlined by Adivi Sesh, who is also coming with the Hindi-Telugu bilingual Major, which is inspired by the life of Major Sandeep Unnikrishnan.

The makers unveiled intriguing poster with release date. The poster informs that something big and interesting unfding before Adivi Sesh eyes and he is trying to contemplate how to face it. From the poster it looks like stakes are going to high this time.

HIT (2019) was a cop thriller featuring Vishwak Sen and Ruhani Sharma. The new film with the tagline ‘The Second Case’ will also be directed by Sailesh Kolanu, who was lauded for his script and style of narration. Sailesh Kolanu also completed the HIT first part remake with Rajkumar Rao in Hindi.