Spoiler alert: We’re about to break down Monday’s episode of 9-1-1. Haven’t watched? You’ve been warned.

A celebrated 9-1-1 dispatcher has taken her last call.

Claudette Collins, played by Vanessa Estelle Williams, was killed in a fire on Monday’s episode, a powerful hour that took the entire call center down with it.

The hour began innocently enough, with Sue forcing May and Claudette into the “quiet room” to hash out their issues. The situation wasn’t looking hopeful, but the two eventually found common ground, with Claudette encouraging May to go to college and live her life — she doesn’t want to see May suffer the toll that this job can take on a person.

Then the building went up in flames, triggering a whole new set of issues. In the midst of the chaos, Sue totally forgot that May and Claudette were still in the building, forcing the women to fend for themselves. May stepped up and saved Claudette, whose burn scars revealed that she was no stranger to the dangers of fire.

Unfortunately, Claudette’s “pressure bottomed out” on the way the hospital, according to an extremely cavalier Jonah. “It’s weird, I should have been able to save her,” he added, seemingly shrugging off the loss. “I usually save them.”

Those last words didn’t sit well with Hen, who confided in Karen that Jonah appeared to show no compassion for Claudette. “You’ve never liked the guy,” Karen said. “Maybe there’s a reason why.” 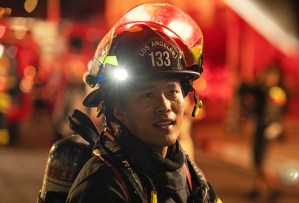 * Albert’s days as a firefighter are numbered, if not already completely over. Chimney’s brother tried to explain that he isn’t sure he’s meant to be a firefighter, but it took almost losing Albert during the dispatch fire crisis to help Chimney see what he was trying to say. Rather than settling for being half as good as he can be, Chimney encouraged Albert to “go out there and be something that allows you to be 100-percent you.” (To whom it may concern, here’s hoping this means we’ll see more of John Harlan Kim on Nancy Drew next season.)

* Eddie’s back! No longer content to save the city one tweet at a time, the former firefighter dropped the “former” this week to help the 118 save everyone at the call center.

* Taylor and Lucy finally met, and while it wasn’t the full-on brawl that Buck probably feared, their encounter wasn’t without tension. “Did you want a comment?” Lucy asks after the reporter introduces herself. And boy did Taylor have a comment to give. “You don’t know what the 118 means to him,” she said. “For Buck, that firehouse is his family. When things gets messy at the 118, he falls apart. I’d hate for things to get messy again.”

* Despite an entire roof falling on Bobby, we all knew that Captain Nash would survive this call. Still, Athena and May made a big deal about him getting that MRI. Is anyone else concerned that there may still be bad news to come?

Your thoughts on this week’s eventful (and tragic) episode of 9-1-1? Drop ’em in a comment below.