Whether you’ve watched every episode of “Keeping Up with the Kardashians” or have problems remembering their names, you’ve probably heard a lot about the Kardashian-Jenner family in the past few years.

They are, without a doubt, America’s reality television royal family.

Not only are they stunning, but they’ve all had complicated love affairs, many of which involved other celebrities.

But through their long dating history, some of those relationships have slipped the minds of fans.

Here are 9 Kardashian relationships you may have forgotten about. 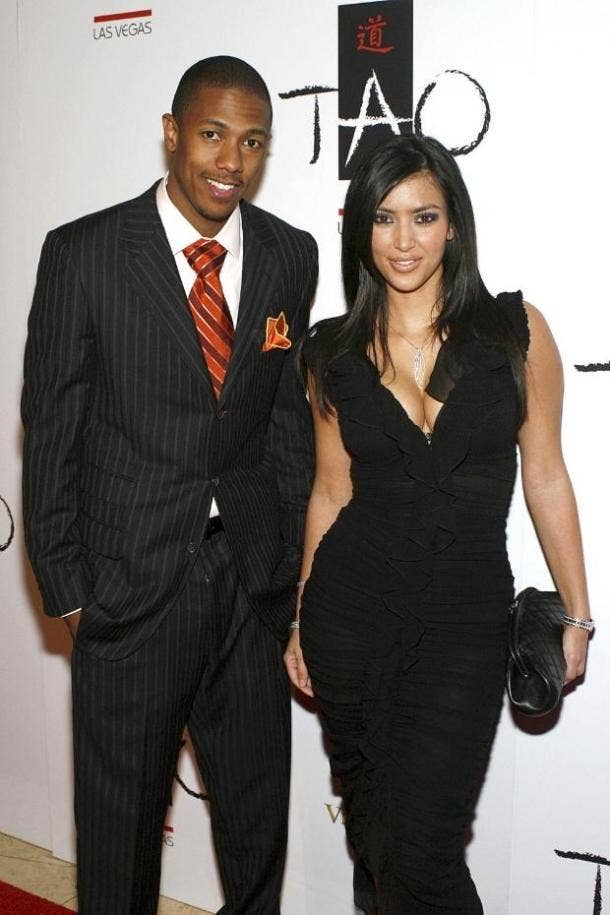 A year before “Keeping Up with the Kardashians” premiered, Kardashian had a fling with Cannon in 2006.

The duo briefly dated before Cannon allegedly dumped her over her sex tape with Ray J.

Despite that, the two reportedly parted on good terms.

According to US Weekly, in a 2014 interview with “Power 106,” Cannon commented that Kardashian is “a great girl though. Her family are some of the most incredible people I ever met in my life.”

In 2011, Jenner and Simpson were seen hanging out at LA’s Grove Mall.

“You’re my rumor boyfriend on Twitter. Nice to finally meet you,” she said.

He later tweeted to the sisters, thanking them for “a real good time.”

Though it’s unknown how long the couple was together, they were linked in late 2011 and spotted together until 2012.

In 2014, Simpson joked that that the relationship ended because of the letter “K.”

“The whole K-O-D-Y thing didn’t really work for me.”

Nick Lachey briefly dated Kim Kardashian in 2006 following his high-profile divorce from Jessica Simpson. The two met at a party for their mutual friend Matt Leinart, an Arizona Cardinal quarterback.

However, their short romance does not appear to have ended cordially.

Lachey explains in an interview with Details that he believed Kardashian used his popularity and status to get famous by tipping off the paparazzi to their dates.

“Let’s just say this: We went to a movie. No one followed us there. Somehow, mysteriously, when we left, there were 30 photographers waiting outside,” he said. “There are certain ways to play this game, and some people play it well,” he continued. 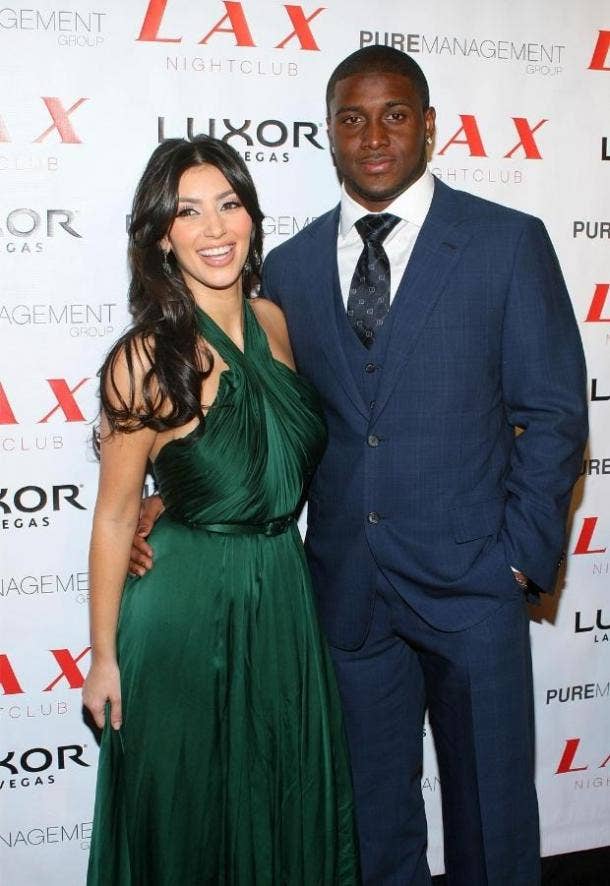 In the mid-2000s, Kim Kardashian and Reggie Bush were among the most famous couples.

Shortly after they were romantically linked, the pair made headlines, and many thought they would eventually marry.

According to Republic World, the two first met in 2007 at an ESPY Awards ceremony and were introduced by a mutual friend. Soon the pair started dating, showcasing their romance in earlier seasons of “KUWTK.”

After dating for two years, the couple split in 2009 due to wanting to focus on their careers and not being able to spend time together.

The couple briefly got back together in 2010 before calling it quits again. 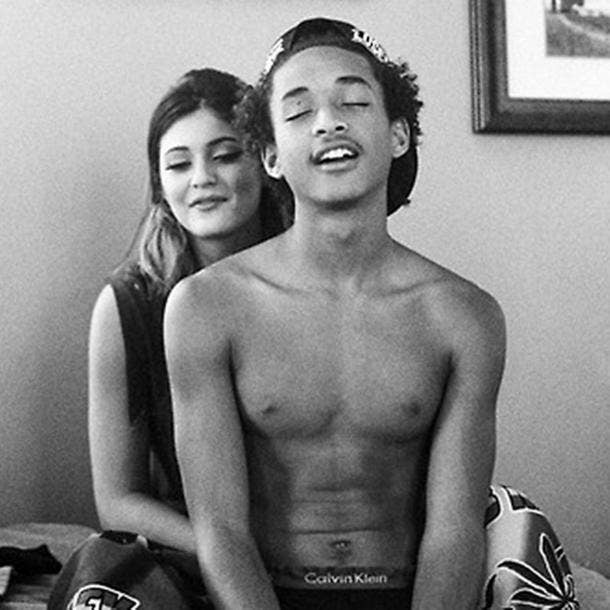 We’ve seen over the years that Kylie might have a thing for rappers, from her three-year relationship with Tyga to her current beau Travis Scott.

But, some fans forget that Jenner had another long-term relationship with another rapper, Jaden Smith.

Since Smith comes from a famous family, it was no surprise to many that the two teens would get together.

According to Showbiz Cheatsheet, the couple was so serious that Jenner even brought Smith to her sister, Kim Kardashian’s, wedding to Kanye West in 2014 as her date.

In an interview with Wonderland Magazine, Smith spoke out about his relationship with Jenner in 2013. “She’s one of my best friends. It’s pretty awesome,” he said.

Their fling didn’t last long, but the two remained friends after they split. Distractify reports that Smith is frequently blamed for Jenner’s breakup with ex-boyfriend Tyga, whom she was dating in 2015.

Before Kanye West and Kim Kardashian became a couple, the reality TV star spent an evening with Ronaldo in 2010.

According to Daily Mail, media outlets caught the soccer star kissing Kardashian during her vacation in Spain.

Sources report that the pair enjoyed a romantic dinner while in Madrid.

“She and Ronaldo were kissing and very affectionate. They looked to be getting on really well, laughing the whole time.”

Sources also believed that she visited the athlete at his luxury home in Madrid before flying back to Los Angeles.

It was never confirmed if the pair was dating or only hooking up.

Kardashian and Montana began dating shortly after her divorce from ex-husband Lamar Odom in 2014.

Initially, the couple kept their relationship a secret. But eventually, the romantic affair was revealed in April of 2014 after the pair was spotted having several romantic outings and hanging out together on multiple occasions.

A source from People Magazine shared that “Khloé is totally with him. She’s having so much fun with him. She wasn’t sure at first where things would lead but he treats her amazingly. That makes her feel really good. She deserves that.”

They also spent time together in the Hamptons that summer while Khloé and Kourtney filmed “Kourtney and Khloé Take the Hamptons.”

In 2010 Kardashian had a brief fling with her now-former Australian bodyguard, Shengo Deane while filming “Keeping Up With the Kardashians” and its spin-off “Kourtney & Kim Take New York.”

Film Daily reports that Deane was trying “to keep things professional,” but Kardashian seemed to have something more in mind.

Though the two split, they remained great friends. In an interview with Now To Love, Deane confirmed that they still emailed each other frequently.

When asked about his relationship with Kardashian, he claimed not to be able to keep up with her and the Kardashian clan.

“They are a beautiful family and I enjoyed being a part of that, but I didn’t really have a lot of work over there and I didn’t want to have to ask for $50 to go to the movies.”

The pair was first photographed together in January 2014, when they were spotted going out to dinner and skiing at Mammoth Mountain in California.

According to People Magazine, this was the first time the two appeared to be a couple in public.

A source told People, “Kendall snowboarded and Harry skied. They were very cute together. There was a lot of flirting and smiling going on. Harry was a gentleman and even offered to carry Kendall’s snowboard to the ski lift.”

The two split in February 2014, according to Hollywood Life.

The couple rekindled their romance in December 2015, when the two vacationed together in Anguilla.

They were photographed getting cuddly on a yacht after fans spotted them enjoying an intimate evening together. The two appeared to be having a good time as they sailed around the island, and they were even seen kissing.

A few days later, they boarded Ellen DeGeneres’s yacht in St. Barts, where they were spotted looking quite like a couple once again.

“They were hanging out together. Do I think they’re dating? Yes. I don’t know if they’re like boyfriend-girlfriend. Nowadays, I don’t know, people are weird with stuff. So I don’t know their’ title.’ But I mean, they were in St. Barts together hanging out, so to me that’s dating. I would call that dating.”

The two were seen multiple times shopping and partying in Los Angeles in 2014. The two tried to rekindle their relationship sometime in 2015 until calling it quits officially in 2016.

RELATED: What It’s Like To Work For The Kardashians, According To Former Staff

More for You on YourTango:

Ashley Darkwa-Anto is an editorial intern at YourTango who covers News & Entertainment.

Get breaking news & relationship advice delivered to your inbox daily!