Mohanlal dropped the trailer of his upcoming film, 12th Man. The Jeethu Joseph directorial venture will premiere on Disney+ Hotstar on May 20. 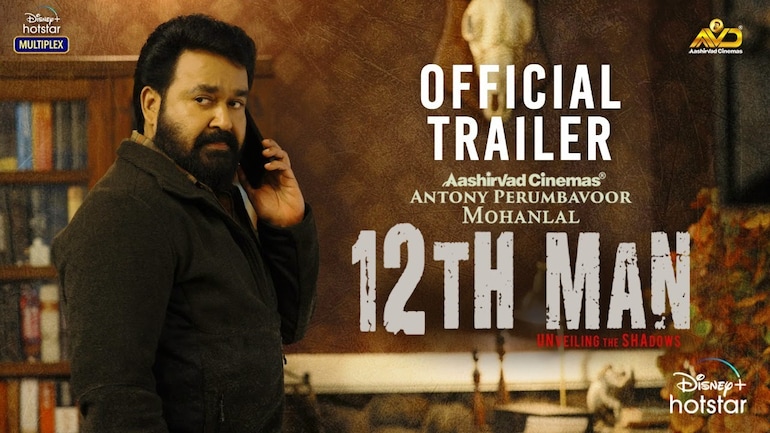 Mohanlal and Jeethu Joseph have collaborated for the fourth time for 12th Man. The trailer of the film was unveiled today, May 3, and it promises a compelling whodunnit mystery thriller. The trailer implies that 12th Man essentially revolves around a group of 11 individuals on vacation. Mohanlal is the 12th Man. Incidentally, a member of the group disappears soon after the arrival of Mohanlal’s character.

It is safe to say that Mohanlal and Jeethu Joseph are masters when it comes to delivering winning mystery thrillers and the two installments of Drishyam clearly implies the same. They tread familiar territory with 12th Man, or that is what the trailer suggests. The whodunnit mystery aspect is highlighted through the course of the trailer. Mohanlal as a drunkard, who is suspected to be involved with the disappearance of a lady from the 11-member group looks sharp as usual. Jeethu Joseph appears to have incorporated his trademark narrative as he presents another edge-of-the-seat thriller.

12TH MAN TO PREMIERE ON DISNEY+ HOTSTAR ON MAY 20

12th Man is set to premiere on Disney+ Hotstar on May 20 and this trailer has set the stage for the same. Notably, Mohanlal and Jeethu Josephs’ previous collaborative project Drishyam 2 had also premiered directly on OTT.